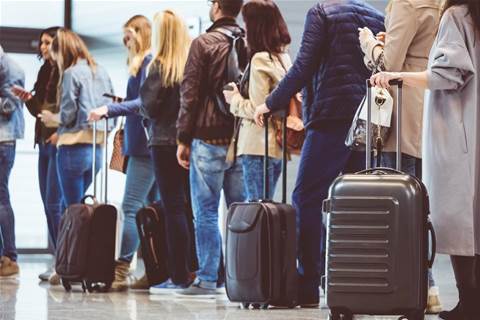 Qantas to introduce service in October.

International travellers flying out of Australia will no longer have to physically check into their flight under changes to the border clearance process unveiled today.

The federal government has begun allowing airlines to issue electronic boarding passes for international flights, as part of its ‘seamless traveller’ initiative.

It follows several successful trials by the Department of Home Affairs with airlines.

The changes will allow travellers check-in and display their boarding pass using a mobile device instead of having to visit the check-in desk before being issued with a paper ticket.

However this will be conditional on individual airlines implementing the changes and issuing electronic boarding passes.

Qantas, for instance, expects to begin offering customers access to digital boarding passes - with the exception of US departures - from October.

It started offering customers the service between Australia and New Zealand over 12 months ago as a trial with Border Force, a Qantas spokesperson told iTnews.

Minister for Citizenship and Multicultural Affairs Alan Tudge said the change was the government's latest step to respond to an increasing volume of international travellers, which climbed to 21.4 million last year.

“These increasing volumes mean we are always looking for ways to clear legitimate travellers efficiently and seek out those of interest to law enforcement,” he said.

“This change will cut out the need to visit the check-in desk to show your passport and collect your paper boarding pass.

"Australia is a world leader in seamless travel and this move will allow travellers to move across our border smoothly.”

The government had already done away with the outgoing passenger card, opting to pull passenger information from existing government data since July 2017.

It is also planning to replace the physical incoming passenger card with an online solution that collects answers to questions and passes them onto Home Affairs systems.

Tudge said the introduction of mobile boarding passes would complement the government’s fleet of departures and arrivals smartgates.

The new automated biometric border control solution is intended to match individuals against facial images stored in airlines’ advanced passenger processing systems, removing the need for travellers to present their passports at the gate to clear immigration