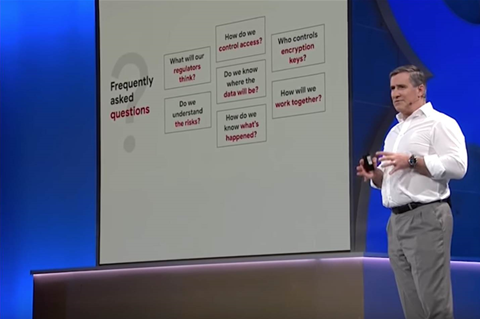 Seeks acceptance in all markets it operates.

HSBC will embark on a “global tour” of regulators in the 67 countries it operates to convince them of the merits of running substantial parts of its data analytics in the Google cloud.

Group chief information officer Darryl West told the Google Cloud Next 18 conference that he believed the institution had already achieved some form of comfort level with regulators over its expansive cloud plans.

Some of those plans were unveiled at last year’s Google conference, and HSBC doubled down on its commitment to run much of its global data through Google’s cloud this week by signing a seven-year strategic alliance.

More broadly, HSBC is adopting a cloud-first strategy for infrastructure and applications, and is looking to run workloads across public clouds from Google, Microsoft and AWS.

Last year, HSBC indicated it wanted to run data extracted from source systems - and analytics and machine learning on that data - on Google’s cloud.

“We have a huge data asset at the core of the company,” West said.

“This year, by the end of 2018, we’ll pass 100 petabytes of data, and within that data there’s a massive amount of insight and we need to leverage the tools we’re using now with Google to be able to get that insight to manage our business better.”

Over the past year, HSBC has stood up two use cases to show the capability of Google to handle the backend data architecture and processing.

“We’re now able to calculate our global liquidity for a country in minutes rather than hours, and critically using BigQuery we’re able to run our financial crime analytics ten times faster with a much higher level of precision and accuracy … ingesting billions of transactions and looking for nefarious activity patterns in those transactions,” West said.

“This has been a fantastic outcome for us and it’s really given us the great confidence to actually progress.

“We have a long list and batting order for new workloads to come over the coming months.”

However, to take the cloud operations model global, HSBC needs the approval of financial regulators in each of the markets it operates in, which includes Australia.

“We are a globally, systemically important financial institution,” West said.

“The banking business is heavily regulated. It’s an important tenet of the banking business that you have trust and confidence the data is secure, and that services are reliable and performant, so clearly anything that we do that departs from history is going to be a close issue with the regulators.”

West said that HSBC had spent “the last year or so” working with regulators across various markets.

“Given our geographic spread, we have pretty much every regulator in the world is looking at what we are doing,” he said.

“We’ve had to invest a significant amount of our time and effort to convince the regulators that moving customer data to the cloud is actually a good thing.

“I’ve taken the position with the industry and the regulators that the more we do with Google in the cloud, [the more] it makes the industry safer, reliable and robust.”

West indicated that there was some comfort from regulators, though it appears some of the heaviest lifting on that front is still yet to come.

“We’re going on a global tour to convince all the regulators that we deal with that this is going to be a better way of running the banking business,” West said.

West said that activities with regulators and HSBC’s executives to date had involved end-to-end risk assessment of its cloud propositions.

“They asked us to cover off all of the issues around operational control - things like who controls the access to the platform, and where will the data be,” West said.

“We’re governed by 67 countries’ different rules around data privacy and data sharing so we have to be in compliance with those rules.

“We need to know what’s happened, how we can monitor the logging on the virtual private cloud, and critically we have to understand how the encryption keys are working because the fact the data is encrypted at rest in the Google cloud is fantastic, but the regulators are requiring the banks to be able to control and manage those encryption keys.

In running customer data and analytics functions in the cloud rather than on-premises, HSBC hopes its teams can spend their time focused on customer outcomes instead of the “heavy lifting” of building and maintaining data analytics pipelines and systems.

To get to that point - aside from resolving regulatory concerns - West said that the next 18 months or so will involve a doubling down on “the wholesale migration of our big data workloads, analytics and machine learning workloads to the Google platform”.

“On data management, interestingly we have a similar problem to most big companies,” he said.

“Historically we’ve not had a great data architecture, and we’re working with the Google team to evaluate ways of being able to catalogue all of our 100PB of data.

“It’s been difficult for us to organise and understand what we have and where it is, so we’re working with their engineering team to come up with some tools and you may hear about those tools at this event next year.”

HSBC is also set to take advantage of the Google cloud services platform (CSP) launched this week at Google’s Cloud Next 18 event.

CSP is a set of services that can be deployed in on-premises or Google cloud environments; effectively Google’s answer to similar hybrid cloud offerings already brought to market by other public cloud players.

“We’ve defined a new stack for our next generation set of applications and we’ll leverage that [CSP] suite of tools,” West added.

Ry Crozier is attending Google Cloud Next 18 in San Francisco as a guest of Google.