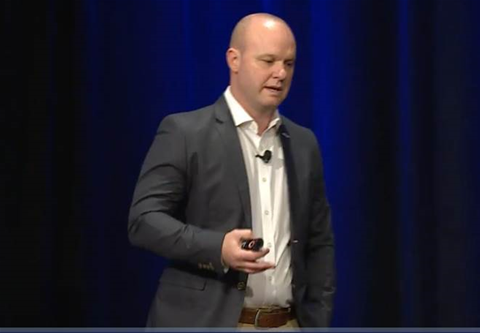 Rabobank is in the final stretch of a two-year digital transformation of its Australian and New Zealand operations, consolidating on a single core banking system and new technology stack.

Chief operating officer Andrew Vickers told the recent PegaWorld 2018 conference that the project brings together “the country bank and lending business and an online retail deposit business” - and three core banking systems, multiple pieces of middleware and front-ends - to run “all in one place.”

“We’re merging two different [Rabobank] brands together, two different business lines, and of course the technology, operations and marketing teams, and merging them together at once,” Vickers said.

“It’s a large program and we’re 18 months into a two-year program right now of bringing it all together and making sure we can actually have everything on one platform and one easy technology stack.”

Vickers said the digital transformation program began in mid-2016 with a “roadshow” of presentations that sold the program on changing the company’s way of working and increasing its ability to deliver quicker.

However, the sheer size of the program of work caused some red flags to be raised within the business early on.

“Most people were saying we were boiling the ocean, that we were doing too much at once to get it right,” Vickers said.

“But we’ve actually made a technology lift and technology step change that we had to do now, otherwise we’d just keep on replacing system after system.

“We’ve been able to freeze some of the existing systems so we’ve put a change freeze in place which has allowed us to move a lot of the BAU [business as usual] staff onto the project to start getting them trained so they understand how to support some of the systems whilst we move towards the delivery date, which is the end of this year.”

New ways for IT

Vickers said the project represents a departure from the way Rabobank has traditionally run IT-led projects, giving the functionality to New Zealand first instead of Australia.

“We actually implemented first in New Zealand,” he said.

“Generally all IT sits in Sydney and we decided for once we’d go to New Zealand first because the general feedback from New Zealand over the years was they’d get things second, that they’d not be first to use new systems.

“So we’ve turned it on its head and put it into New Zealand first, and the engagement in having them involved in the project has helped drive adoption across the business, as well as allowed New Zealand to have a voice within the project as well.”

The project also sees Rabobank favour commercial software over tools that are built by internal teams.

“We are trying to get away from being an IT or software company. Instead, we’re a bank that has good software that we’ve bought from partners or vendors that we interact with through APIs and other interfaces, rather than us thinking we have to design and develop each of the applications ourselves,” Vickers said.

“I think what we’ve found over the years is we haven’t probably been that great at [internal development].

“For example, you can go and partner with [vendors]  to get the best of their R&D or have a team of 5-10 people internally developing on one app. [In the end], you just can’t compete.”

For the wider business, more benefits are expected by introducing ‘enterprise agile’ methodologies as part of the project.

Rabobank is joining a number of other financial institutions, including ANZ Bank and Macquarie Group, in pursuing broad adoption of agile.

“As of the start of 2017, we were completely a waterfall company,” Vickers said.

“We’re still not completely agile yet - it’s baby steps - but we’re getting to the point of delivering quickly.”

Vickers said the transition wasn’t easy and had highlighted - among other things - the importance of appropriately resourcing internal coaching capabilities in order to achieve the end goals of agile adoption.

“There’s a lot of coaching that needs to be done,” he said.

“We’ve found that we’ve had to beef up lately more coaches internally to get the velocity higher because we were struggling a little bit to get the right velocity to deliver to the end dates of the program as well.”

Internally, agile was sometimes being referred to as “fragile … because sometimes it was easier to jump back to the waterfall delivery [process] rather than continue on with an agile delivery piece.”

Not all of the digital transformation program of work was conducive to being delivered in an agile way, either.

“We had to be realistic in regards to some of the work streams,” Vickers said.

“One of the streams is the core banking migration, which we’ve kept as a waterfall delivery because you can’t really do a migration [like that] in an agile manner.

“So we do have some waterfall and some agile, and we’re working through it at the moment.”

Vickers suggested that true enterprise agile “is probably a couple of years away”.

“We’re just doing baby steps at the moment to make sure we can get to that point, get people trained up, and we are delivering in that manner,” he said.

One of the expected benefits of the transformation is that it becomes much simpler to get customers onboarded with the bank, as well as with new financial products.

Rabobank is well known for its agribusiness - farming - focus. However, this means most of its customers live between one and two hours’ drive from a physical branch.

“The client that lives farthest away is a 10 hour drive,” Vickers said.

Farmers in general are being exposed to more technology in their operations. Rabobank’s relationship managers, who do in-person visits, had seen this first-hand, and knew Rabobank had to catch up in this respect.

“Our relationship managers walk up to the farmer with a pen and notepad - currently that’s how we have a conversation with our clients,” Vickers said.

“We’re looking at offline and online capabilities of how we can store and present data back to the client to have better decision making process [in place].”

Farming clients were also brought into the digital transformation, with Rabobank’s technology team collecting their feedback on customer experience (CX) and user experience (UX) aspects of the project.

“So for us, speaking to a client is quite easy, but we’ve never spoken to a client about technology before so [our] people were quite hesitant about going out to the client and talking about a new online and mobile banking channel, a new onboarding channel, and what that means for them,” he said.

Vickers said that the feedback loop has now been formalised as a “client committee” that allows technology to “be able to actually have these conversations at a more frequent basis to allow us to continuously test things with the clients and take their feedback.”

The arrangement had also been of sizable benefit to the technology teams.

“We all know the technology teams are sometimes very far away from clients, so being able to connect technology with our clients has been a great thing,” he said.

Vickers envisages a number of improvements to the onboarding process, mostly powered by the use of Pega tools.

An immediate one is that shared customers across different Rabobank business lines will no longer be asked to supply the same know your customer (KYC) information multiple times to consume different financial products.

“That’s allowed us to start looking at how we reduce that friction point for our clients so we’re not constantly asking them for more information, and has helped us digitise the onboarding process,” Vickers said.

Rabobank is also hoping to make it easier for new customers to be able to digitally sign transactions.

Currently, new customers are sent a hardware RSA token for authentication purposes. However, as these are mailed out, it can sometimes take up to a fortnight to arrive at a remote or rural property, meaning a long delay before the new customer can start transaction.

“Moving forward, we’re going to have the ability to have soft tokens [and] some biometrics, and start giving options to clients,” Vickers said.

“There’s some real opportunities with soft tokens to onboard a client, send them out a link to a soft token, download the soft token and pretty much be within the Rabobank online mobile banking system within minutes or hours rather than days.”

Though various pieces of the technology stack have been implemented since the start of last year, there is still some significant work to go before the project wraps up at the end of 2018.

“There’s a fair bit we’re trying to change from a Rabobank point of view: merging brands, aligning countries across the Tasman, and making sure we have one technology stack going forward is a big job and it’s not easy,” Vickers said.

“We’ve got six months left on this program and the last six months is always the hardest when people start questioning the end date and are we going left or right.

“You’ve got to sit there and make sure you deliver to the dates that you’ve put forward because it’s too easy to push dates out and not deliver on the exact day.

“I expect the next six months will be a fair bit of hard work.”

However, Vickers believed the end game would be worth the effort.

“We’re going to be in a position where we have a complete 360 degree view of our client,” he said.