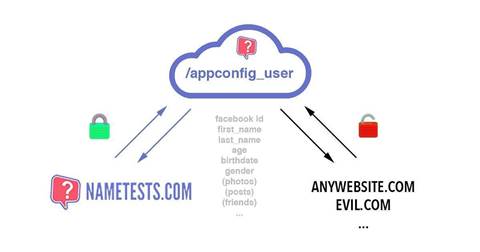 A security researcher has found that a popular personality test app running on Facebook contained an easily exploitable flaw that could be used to expose sensitive information on tens of millions of users.

De Ceukelaire discovered that when he loaded a personality test, NameTests.com fetched his personal data from Facebook and displayed it on a webpage.

He was shocked to see that users' personal data was wrapped in a Javascript file by NameTests.com, which could be accessed via a weblink over the plain text HTTP protocol.

The security researcher tested this by setting up a website that connected to NameTests.com and was able to access Facebook posts, photos and friend lists belonging to visitors.

Worse, De Ceukelaire found that NameTests.com doesn't log off users which means the site would continue to leak user data even after the app was deleted.

While the security researcher made it clear that only users that visited an attacker's website would have their data leaked, the flaw in NameTests.com has been around since the end of 2016.

NameTests.com has over 120 million monthly users, and generates more than three billion pages views a month.

De Ceukelaire contacted NameTests.com which said that to their knowledge the flaw had not been abused.

However, the flaw was very easy to spot and, given the large number of monthly users and page views, De Ceukelaire said he would be surprised if nobody had found the bug earlier.

He suggested users should be wary of giving new apps access to their data, and to delete any apps not in use, as well as removing browser cookies on a regular basis.

Facebook acknowledged the flaw and paid De Ceukelaire a US$8000 (A$10,888) bug bounty that was donated to the Freedom of Press Foundation.