Bechtel makes a game of its billion-dollar build projects 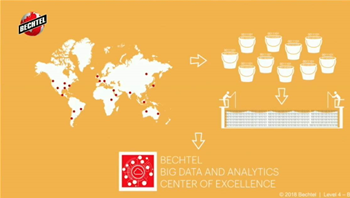 Bechtel - which engineered some of Australia’s largest liquefied natural gas projects - is turning to deep learning to sequence the construction of a new breed of multi billion dollar “mega” projects.

The privately held company is little known outside of the resources sector but has been in business about 120 years and has over 50,000 staff worldwide.

Its bread-and-butter is design and construction services for massive projects.

In Australia, it built all three liquefied natural gas (LNG) plants on Queensland’s Curtis Island for projects run by Shell, ConocoPhillips/Origin, and Santos.

It is also the builder of BHP and Mitsubishi’s Caval Ridge mine, Wheatstone LNG off Western Australia, and the expansion of coal loading on Kooragang Island near Newcastle.

Bechtel’s problem, according to senior big data architect and engineer Justin Leto, is that it exists in a sector where productivity growth rates have flatlined to low single digit for years.

Other labour-intensive industries such as manufacturing consistently outperform the construction sector.

Leto said Bechtel wanted to change that, but knew it had its “work cut out”.

“We can’t get there with incremental innovation,” he said. “We needed something that was more disruptive.”

Bechtel has been part of around 25,000 construction projects over the years. The company wanted to see what - if anything  - it could learn from them when trying to come up with the best way to approach the build at a new site.

Planning and build activities typically leverage the experience of the people involved, but Bechtel wanted to check if the way people approached sequencing really was the most productive.

“If you think about some of these mega projects that span decades, and cost billions of dollars … there is no deterministic way to order the sequence of construction,” Leto told this month’s Spark+AI Summit.

“And if you take two people building a similar plant with the same workers, we found that we would get very different results. That variability adds a lot of risk, and that risk adds a lot of cost.

“[We thought:] let’s compare how humans sequence construction compared to the machines.”

“The potential to optimise is really major here and that’s what we’re trying to do,” Smith said.

Bechtel set up a big data analytics centre of excellence - which it calls BDAC.

It operates as a shared service that can be used to “try to identify what makes projects profitable, safe, and high quality”.

Those findings can then be used “to make better, faster and smarter decisions”, Smith said.

The BDAC is essentially the central store of expertise for deploying AI and deep learning models in the business.

Bechtel brought in Miner & Kasch, a data science consultancy, “to help us bootstrap while we staffed up” the centre, Leto said.

“Miner & Kasch was responsible for the pilot that established to Bechtel that this is something we really should pursue,” Smith added. “They also set up original team and a lot of baseline architecture.”

At a very basic level, Bechtel has brought together its knowledge base of data and centralised it in a data lake, which runs on AWS’ S3.

The company is using Databricks’ unified analytics platform, a managed service built on Apache Spark, to bring its different data sources together and to machine learning across that data at scale.

One challenge in working out the best way to sequence a construction project is that, on a large build, there are “millions of different ways you can” approach it.

“There’s a lot of embedded knowledge in Bechtel over 120 years about how you might build these things, but there’s also a lot of disagreement about what the best way is,” Smith said.

The purpose was not just to learn from the past, but also to find “novel sequences that we have not observed or tried” and to simulate whether or not they would work.

The company’s long, complex construction jobs meant that any suggested sequence had to take into account a number of different factors.

“We needed to assist our planners in getting an initial understanding of the job and its constructability,” Smith said.

“But these projects also take years so we need to assist in long term planning and make sure we can provide a detailed sequence that spans the entire duration of the project.”

If Bechtel was to be able to suggest efficient construction sequences, it needed to distinguish between sequences that were “constructible” and those that were “possible” but likely unfeasible.

It also needed to be able to suggest sequences that could handle the dynamic nature of large build jobs.

“We’re talking about multi-year projects, which means a highly variable environment over the course of an entire installation sequence, and anything you do has the potential to have unforeseen knock-on effects potentially years in the future.

“We need to be able to anticipate that and deal with it.”

A construction project is represented on a 3D grid as a series of 120-inch (3m) cubes.

A colour gradient system is used to show the density of building pieces - such as pipes or steel - that has to be installed within that cube.

“Instead of a 2D game board we have a 3D grid where each space on the grid is characterised by its density, and instead of game pieces we have individual pipes or pieces of steel,” Smith said.

“Then, we can define a legal move in the game as one in which we install something that has not yet been installed into the space that, according to the engineering design, it is supposed to go into.”

“To choose a move and learn sequences, we use a combination of Monte Carlo tree search [a heuristic algorithm for decisioning], and a 3D convolutional neural network, which is a framework quite similar to the one used by [DeepMind’s] AlphaGo Zero”.

Smith said the architecture was “a little more complex” than AlphaGo Zero because Bechtel’s “game” - its construction project - is three-dimensional.

Bechtel’s game is also single player. “In our game structure we can repeatedly play ourselves and try to beat our best score [which means trying] to minimise our [build] effort over multiple games.

“So in Monte Carlo tree search, briefly, we start at our given state and we identify all possible moves. Then we want to predict their probabilities and simulate over them,” Smith said.

“We pick the most urgent move. We play out to the end of a complete sequence, predict whether it would win, and then we back propagate that through the tree.

“We do this over and over again for n simulations, and then we select the winning-est next move. That’s one move. We then rinse and repeat and do this over the entire installation sequence.”

Smith said the model had proven powerful for not just finding “learned sequences” - that is, past experiences it could call upon for future projects - but also for producing “novel sequences”.

“These have never actually occurred in the world but our data tells us they should be more efficient,” Smith said.

Bechtel hasn’t yet released its construction sequencing model into the wild, but will do so for the first time in September this year.

“We’re still trying to make it run quickly enough but we are working with SMEs [subject matter experts] on particular projects that are moving to a new phase of construction in about September and we’re working to have sequences [produced by our model] that can be validated in the field,” Smith said.

“The goal is September to have constructible sequences in the field.

“Once those are validated then we’ll worry about building out a tool that can be used in the planning process when the engineers sit down and do this [for every project we work on].”