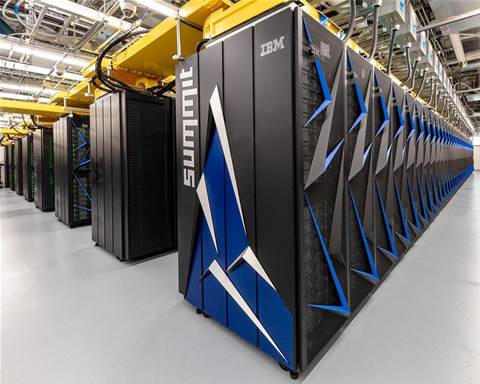 A new supercomputer at the United States Department of Energy's Oak Ridge National Laboratory (ORNL) has broken the exascale computing barrier by taking a non-traditional approach to enhancing performance.

ORNL said it achieved a peak throughput of 1.88 exaops while analysing genomic data - faster than any previously reported science application.

That is equivalent to nearly 2 billion billion calculations per second, ORNL said.

The hardware in question was the Summit supercomputer, which is built around an IBM AC922 system with 4608 nodes, each equipped with six NVIDIA Volta graphics processing units, for a total of 27,648 video cards, and 1600 gigabytes of memory per node.

Summit uses 9216 IBM Power9 CPUs with the NVLink high-bandwidth connections built in, and has a total of ten petabytes of DDR-4 and stacked, 3D HBM2 system memory.

The supercomputer draws 13 megawatts of power and is able to offer 200 peta floating point operations per second (petaflops) application performance.

That performance metric would see Summit take first place in the TOP500 spot, beating out China's Sunway TaihuLight system that has been benchmarked at 93 petaflops.

To breach the exascale barrier, ORNL used a mix of numerical precisons.

Furthermore, ORNL modified the Combinatorial Metrics comparative genomics application to use the Tensor core matrix multiplication capabilities that NVIDIA has added to its Volta GPUs.

WIth all the optimisations in place, Summit achieved a 25-fold code speed increase compared to ORNL's previous supercomputer Titan.

Apart from analysing large datasets comprising millions of genomes to compare variations present in the same genes in a given population - a task that, given its size, was impossible to do before - Summit will be aimed at solving several other scientific problems in various areas.