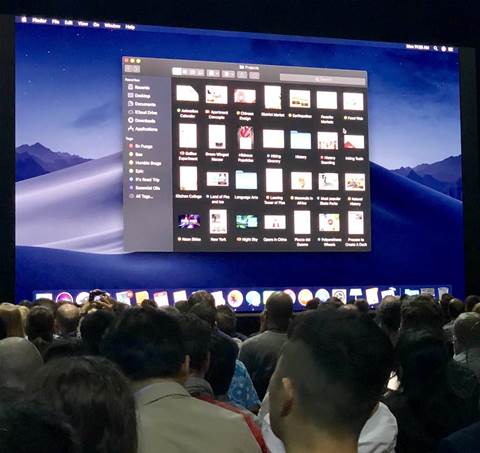 The company’s head of software development Craig Federighi jokingly blamed Apple’s "crack marketing team" for the name, which follows the location-based theme introduced with OS X Mavericks, which replaced a string of large cat-monikered versions of the OS.

Some of the key features macOS Mojave will bring include a dark mode aimed at photo and video editors and developers, or for normal users who think it looks cool.

Built-in macOS apps such as Finder and Desktop have been improved to allow users to sort through files better with Stacks and more information in the Preview pane.

Mojave also allows users to take screenshots and go straight to editing, marking up and sharing them, and to record video.

As with the upcoming iOS 12 that was also announced at WWDC 2018, macOS Mojave will get the Group FaceTime video and audio communications feature that allows up to 32 participants to join a chat session.

The macOS App Store will be extensively remodelled in Mojave, to let users find what they want more easier.

For the first time, Microsoft will allow its flagship Office productivity suite into the macOS App Store.

Adobe will likewise put Lightroom CC into the App Store, along with Bare Bones’ BBEdit, Panic Software’s Transmit, and apps from other third-party vendors.

In iOS 12 - which was previewed today - are new privacy and security features such as improved password handling to prevent credential reuse, and protection against apps accessing Mac cameras and microphones without user permission.

Apple also took a swipe at Facebook. It said that intelligent tracking prevention in Safari would stop social media Like and Share buttons from following users around the web.

In addition, Safari will soon have an anti-fingerprinting feature that minimises device and software information that can be used to identify users being shared with third parties.

This won’t happen, Federighi said, and the two will live on as separate versions but with greater app and feature integration between them.

Among these integrations are easier cross-platform development of apps targeting both iOS and macOS, with Apple unifying the now-different user interface frameworks for the two into one.

However, this won’t be available for developers until late 2019.

While developers will get access to betas of iOS 12 and macOS Mojave by the end of June, they’re not expected to be generally available until spring in Australia.

Both iOS 12 and macOS Mojave will be free updates, Apple said.

Apple also released new versions of iOS (11.4) and macOS (10.13.5) during WWDC 2018. These contain bug fixes and allows users to store Messages with texts and attachments in the iCloud, so that they take less space on devices.

Juha Saarinen travelled to the Apple WWDC as a guest of Apple.