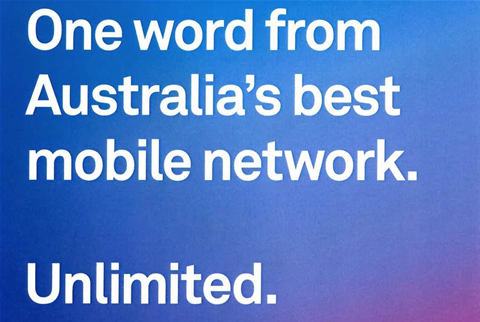 In proceedings brought by Optus.

Telstra has lost a federal court battle filed by rival Optus over its marketing of a new type of mobile plan as “unlimited”.

In a judgment handed down today, Justice Jacqueline Gleeson found that advertising of the ‘Endless Data BYO Plan’ broke Australian Consumer Law and was likely to have misled customers.

Telstra launched the plan on May 1 this year.

Among its features was “40GB of data at uncapped speeds followed by peace of mind data capped at 1.5Mbps for the remainder of the month”.

Optus took exception to the campaign and filed suit, alleging the use of the word ‘unlimited’ without any qualification was likely to mislead consumers over the inclusions of the plan, as well as Telstra’s network capabilities and geographic reach.

Telstra countered by arguing that its use of the word conveyed “nothing definitive, doing no more than [to] cause a viewer to wonder about its meaning”.

It invariably claimed Optus was partaking in a “strained and remote” or “extreme and fanciful” reading of the advertisements, “that no reasonable member of the audience to whom they are directed would arrive”.

However, under cross-examination, Telstra was forced to admit there was some ambiguity in the way “unlimited” could be read in its advertisements.

Justice Gleeson said that “based on the evidence ... I accept that [the] speed cap in the ‘Endless Data BYO Plan’ is a significant limit on usage of the services provided under the plan because the plan does not permit a user to download and upload unlimited volumes of data at unrestricted speeds”.

In addition, Justice Gleeson said she “do[es] not accept that the word ‘unlimited’ would be understood as imprecise or having no fixed meaning”, contrary to Telstra’s claims.

“Thus, relevantly, I find that the range of reasonable interpretations of the Telstra unlimited advertisements includes the representation that Telstra offers a mobile product or service that is unlimited in the sense that Telstra imposes no limitations on the speed at which data can be downloaded; the volume of data that can be downloaded at unrestricted speeds; and the user’s ability to download data without interruption or delay,” Justice Gleeson wrote in her judgment.

“Separately, I also find that a reasonable interpretation of the advertisements includes the representation that Telstra offers a mobile product or service that is unlimited in the sense described above and may be used on any kind of mobile device that can operate through Telstra’s mobile network.”

Questions of declaratory, injunctive or other relief, as well as who pays the costs of the case, will be heard at a later date.