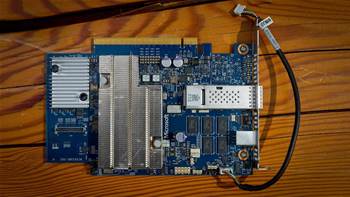 Microsoft will preview hardware-based artificial intelligence and machine learning acceleration for its Azure cloud platform, aiming to provide real-time calculations for applications such as image recognition.

The technology is to be formally known as Azure Machine Learning Hardware Accelerated Models.

Customers accepted into the preview program can train the ResNet 50 deep neural network model for image recognition, with the hardware being able to churn through eight billion calculations without batching being required.

The FPGAs can be reprogrammed to keep up with new AI developments, and accelerate deep neural networks with 39.5 tera floating point operations per second (TFLOPS) performance.

FPGAs are normally used for specific applications, and Microsoft said its Project Brainwave is the first time the technology is used in a large-scale cloud computing scenario.

Aside from the limited preview in the Azure cloud, Microsoft also plans to make Project Brainwave hardware available for on-premises use by customers such as manufacturers.

Microsoft launched further AI-based capabilities at Build, including speech recognition and the ability to build bots and search indexing with cognitive services.

A new Windows Machine Learning platform that allows developers to create models in Azure, and then deploy them offline on PCs also saw light of day at Build.

The company also launched a US$25 million AI for Accessibility initiative which is a five-year program to support over one billion people with disabilities around the world.