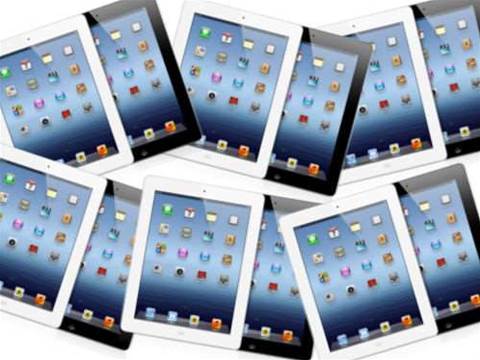 Hundreds of thousands of devices use new addressing scheme.

Telstra now has “hundreds of thousands” of devices on its mobile network that use IPv6 addresses to access internet content.

Technology team manager Jeff Schmidt told the annual Apricot internet conference that many of these devices were iPads that had been patched or built to support both IPv4 and IPv6.

Such devices - and the core network underpinning them - are said to be dual-stack; they support and can understand both IPv4 and IPv6 packets, but favour IPv6 where possible.

“We have a dual-stack deployment for the iPad that has been quite successful, and we are now seeing quite a number of devices being allocated IPv6 addresses,” Schmidt said.

“[We’ve seen] a step increase in IPv6 usage as we rolled out dual-stack to the iPad devices.

“The number of users or devices that are using IPv6 addresses is in the hundreds of thousands.” 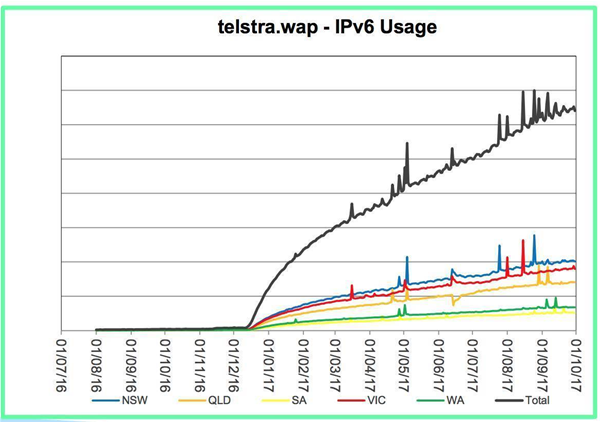 IPv4 has been a problem for the internet industry for much of the past decade. The number of IPv4 addresses is finite - the pool of reachable addresses on the public internet is around 3.7 billion in size - and it was exhausted in late 2016.

Carriers like Telstra officially ran out of their allocations before that and have been using network address translation or NAT as a workaround.

IPv6 is designed to replace IPv4, with a much greater pool of addresses. However it is not backwards compatible with the older protocol, which means operators effectively have to migrate to a new, IPv6 internet from the older IPv4 one.

Both address protocols need to run simultaneously for a transition period as “many existing systems still need IPv4 to function”, according to the Internet Society. A growing number of content providers are making their sites available via IPv6.

Telstra introduced dual-stack IPv4 and IPv6 addressing on its mobile network in September 2016.

Advanced users at the time were given the option to manually reconfigure their devices, though the carrier did not recommend doing this for iOS-based devices.

In the case of iPads, dual-stack carrier settings were enabled via a specific “iOS profile” that was made specifically for users of Telstra’s mobile network.

“IPv6 take up occurs when iPads are patched to the latest version,” Telstra said in its presentation notes last week [pdf].

The settings are also included in the “carrier build” of iOS devices that Telstra sells in its stores.

“The way we manage these deployments is we ask Apple to provide us with a certain build for the devices as we sell them through our Telstra shops,” Schmidt said.

“We describe to Apple how we want the devices configured for us. They then build them for us and we sell them so they are a Telstra build

“As they’re introduced into the network, automatically - or from the subscriber's perspective anyway - their device starts using dual-stack and it's transparent to them.”

Schmidt said Telstra was still working towards moving to single stack IPv6 for mobile internet, where end user devices would only be able to connect over IPv6.

In reality, many more Telstra mobile customers have devices that have been assigned an IPv6 address so they can use voice over LTE (VoLTE) services.

“The VoLTE service we have deployed is single stack IPv6,” Schmidt said. “The number of devices using IPv6 for VoLTE is now in the millions.”

Schmidt said that, as with the iPads, the carrier had seen a “step increase” in VoLTE adoption when carrier builds of devices came with VoLTE enabled by default.

“Again, that was a migration step for us to step up usage on the network by controlling the device and how it's built and supplied to Telstra,” he said.