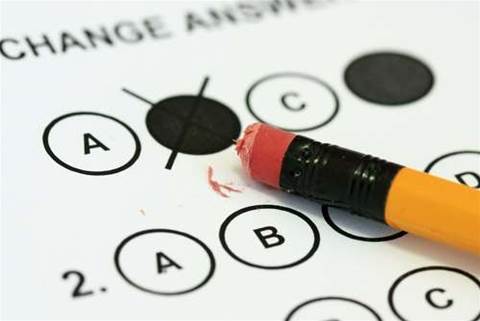 The Council of Australian Governments (COAG)'s education council quietly revealed the decision - which was made in December - last week, but said it wouldn't rule out reintroducing the plans in the future.

Australia’s national curriculum authority, ACARA, announced plans to use cognitive computing to mark the writing component of the annual benchmarking exams almost three years ago as part of the move to NAPLAN online.

At the time it said there was a growing body of academic literature that supported the use of automated marking solutions as an alternative to human markers, claiming in many instances they performed as well, or even better, than the teachers involved.

Emulating human marking was also intended to allow for a faster turnaround of results, letting “teachers and schools to respond to identified student learning needs more quickly”, the authority said.

Computer models would be trained to score certain writing characteristics, including grammar and syntax, by feeding more than 1000 samples of students’ writing and the marking criteria into the automated essay scoring system.

Exams were to be initially marked by both the automated essay scoring system and a human marker to “provide reassurance of reliability”, ACARA said in September, with “difference resolved by a senior human marker”.

But the proposal has long been a concern for teachers' groups, who have argued that computer-based marking undermines the creative aspect of student performance and learning.

It most recently came under fire from the NSW Teachers Federation, which accused ACARA’s plan as being “methodologically flawed” and “massively incomplete”, shortly before Fairfax revealed NSW had ruled out introducing automated marking.

Last week the COAG education council quietly revealed that it made the decision not to introduce  automated essay scoring at its December meeting, which it did not release a communique for at the time.

“Any change to this position in the future will be informed by further research into automated essay scoring, and be made as a decision of the education council," it said.

ACARA said the decision had been made to “allay” concerns.

“While research by ACARA shows that automated essay scoring has the potential to be a viable option for marking writing scripts, concerns still exist for some stakeholders," it said in a statement.

The education council did not indicate whether ministers had also agreed to give schools another year to transition to NAPLAN online, something that Western Australia’s education minister Sue Ellery had intimated was being considered ahead of the December meeting.

ACARA is still aiming to shift NAPLAN fully online for all states and territories by 2019.