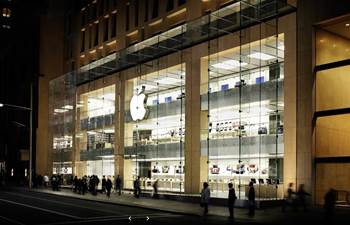 Apple paid its largest Australian tax bill in years in 2017 as it topped $8 billion in local revenue for the first time ever.

The iPhone maker nearly doubled its gross profit from $131.8 million in 2016 to $255.4 million last year, in turn raising its taxable income.

Apple's statutory 30 percent tax bill of $76.6 million was compounded by a number of additional tax expenses, adding up to a total income tax expense of $183 million for 2017.

This included a tax adjustment of $90.3 million related to prior years and a deferred tax income expense of $12.6 million.

It did not include sales of the much-anticipated iPhone X, which marked the biggest revamp of the smartphone range in years, and was released in Australia on November 3.

Apple's previous record revenue was $7.9 billion in 2015, driven by sales of the iPhone 6.

Apple has been under scrutiny internationally for its tax arrangements. The company was hit with a €13 billion fine in August 2017 by the European Commission, which found its Irish tax structure "illegal under EU state aid rules".

The Australian Taxation Office has sought to clamp down on tax avoidance by large global companies, including through the multinational anti-avoidance law (MAAL) and the diverted profits tax (DPT).

It has also been investigating transfer pricing, which are international transactions with a related party that can be classified as international profit shifting when not in accordance with Australian rules.

Apple, like many local subsidiaries of global corporations, pays a selling, general and administrative (SG&A) expense to its parent company, which reduces its taxable income.

Got a news tip for our journalists? Share it with us anonymously here.
Copyright © CRN Australia. All rights reserved.
Tags:
appleaustralian taxation officefinanceiphonetax