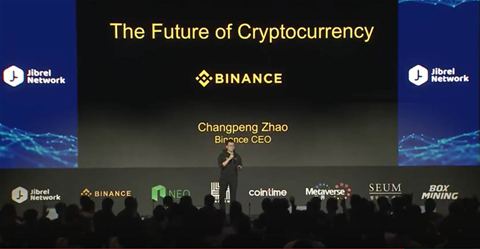 Crypto exchange Binance has revealed it received more than 5000 applications for new virtual coin listings in the six months it’s been operating, with a handful offering millions of US dollars upfront to skirt listing processes.

CEO Changpeng Zhao provided a rare behind-the-scenes look at the operational structure of a major cryptocurrency exchange in an appearance at the Blockchain Revolution conference in South Korea overnight.

China-based Binance has quickly established itself as a major worldwide cryptocurrency exchange, despite only existing for just six months.

Zhao said it is in “the top three exchanges in the world” - its exact position shifts a bit due to fluctuating trade volumes - which it has achieved in part by pitching itself as “country-agnostic”.

“We don’t really care which country, language - we just want to provide a place for people to buy or trade cryptocurrency,” he said.

It now has six million users worldwide, and currently only accepts new registrations in a random “one-to-three hour” time slot every day.

The exchange supports about 237 trading pairs and 100 different coins, and Zhao said its biggest trading day hit US$10 billion - about 40,000 transactions a second.

Anecdotally Binance appears to have many Australian users, given its frequent mentions in domestic crypto forums.

Unlike many smaller, more local exchanges, it does not deal in fiat currencies at all; users need to swap their regular currency for Bitcoin or Ethereum in a local exchange, and then transfer that to Binance, where they can trade.

Despite the current dip in Bitcoin and many virtual currencies tied to its value, Zhao said he thinks his business has considerable long-term prospects.

“I believe almost every country, province, company, organisation, team, project, person and thing can issue a token. Some of them will be valuable - some of them won’t.”

Zhao’s buoyancy is likely the result of the enormous interest he’s fielded from projects wanting to list on Binance in the short time it has been operating.

What Binance looks for in coins

One of the more interesting aspects of his presentation was the opening of the “black box” on how to list on the platform.

He said more than 5000 projects had applied to list on Binance, but the reality was that less than three percent would make the cut.

“We are really tightening up our listing criteria,” Zhao said.

His major problem was sifting out the “bad players, scammers” and projects with little prospect of providing any value to investors.

Zhao listed the criteria that Binance uses to measure projects against each other.

“We like projects that are technically based so [they have a] strong tech team [behind them, and a] very active code base,” he said.

“We want to see the source code on Github and we want them to be very active.”

Pre-initial coin offering (ICO) projects are “incubated” in Binance Lab, which provides advice to project teams on how to succeed.

“That would naturally grow into Binance Launchpad which is the platform where you do a public sell,” he said.

Zhao said he looked for ICOs in the US$5 million to US$20 million range.

“For public sells, we really don’t like big ICOs so if you want to raise US$100m we are probably not going to do that project for you,” he said.

“We want projects to be small. No matter how grand or famous your team is, we want a project to be between US$5 million and US$20 million. I think that’s way more money than most start-ups need.

“Why do we do that? We want you to leave value on the table so that there’s room to grow later.

“We don’t want projects to reach their full value at ICO because what happens then is once you get on the exchange, people are not going to buy any more and the price is going to drop. We don’t like that.

“Technically speaking it’s not our problem - it’s the investors’ decision to buy or sell - but we don’t like projects that don’t perform well on our platform.”

Binance does not release 100 percent of the funds that an incubated project raises when it lists.

“They have milestones to deliver. Once the projects deliver those milestones we will release the funds in batches so this way if the project runs away or could not deliver, they do not get all the money they raised.

“This is either an incentive or penalty for the project to perform. We want to see projects deliver their product. This is a model we like to encourage.”

Right now, all projects hoping to list on Binance have to apply using a webform.

“That’s the only entrance,” Zhao said. “Talking to me does not help.”

It doesn't stop project teams from trying however, though Zhao said he rebuffs any attempts to sidestep Binance’s internal processes.

“I think in the last three days I’ve had more than three people come to me and say I’ll give you US$2 million to list this coin for me. I said no, submit the form,” he said.

“We want to avoid that kind of situation.”

The forms are vetted by an internal “review team” that Zhao said was not allowed “to have contact with the outside world”.

“Nobody knows who they are and project teams are not allowed to talk to them,” he said.

“The only way project teams can interact with them is to submit the form with useful information.

“We want to remove any influence or bias from our review teams.”

The review team scores the project, and if the project meets Binance’s criteria, a business development team then reaches out to “discuss some commercials”, such as a “listing fee” payable to the exchange.

“We do not tell projects [exactly] when they will list,” he said.

“If you see any projects claiming they will list on Binance by a certain date you can be pretty sure that’s not going to be true.

“We will most likely cancel the listing.”

If Zhao’s future of “millions” of coins is to be realised, he says exchanges will need to get a whole lot faster to be able to keep up with the complexity and volumes.

He already has plenty of headroom in Binance’s core matching engine (the system responsible for matching bids and offers in order to complete trades).

“Our core matching engine can handle 1.4 million transactions per second so on the highest performance day we used about three percent of our capacity for the matching engine,” he said.

“We are actually doing upgrades for that now because we want to be ready for another 100x increase in volume.

“We are working very hard on those lower level things that people don’t see.”

The issue continues to be on the minds of investors and exchanges alike; it is thought to be playing a role in the current dip in crypto values. In Australia, exchanges will soon need to comply with new anti money laundering (AML) rules.

He argued bans would not work because blockchain businesses and exchanges would simply leave that market and do business legally somewhere else.

However, Zhao said he was also against the prospect of zero regulation, believing there needed to be “some rules” to curb the influence of bad actors in the crypto space.