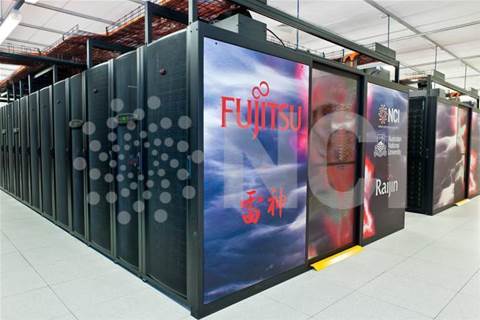 The federal government has given the National Computational Infrastructure (NCI) $70 million to replace Australia's highest-performance research supercomputer Raijin as it approaches end of life.

The money will "bring [Raijin] to world-class standards" and "ensure that Australian remains globally competitive in data intensive research fields".

NCI expects to open the tender process for a new high-performance computer (HPC) to replace the predominantly Fujitsu-based machine as early as possible in the new year.

It hopes to announce a winning bidder before the end of 2018 and have the supercomputer commissioned in 2019.

Fujitsu will continue to support Raijin until the replacement machine enters operation, chair of the NCI board emeritus Professor Michael Barber told iTnews.

He said he expected the new supercomputer would be somewhere between eight to ten times more powerful than the existing machine.

This would put Raijin in the top 25 most powerful supercomputers internationally.

"This is a very nice Christmas present," he said.

"The NCI supercomputer is one of the most important pieces of research infrastructure in Australia.  It is critical to the competitiveness of Australian research and development in every field of scientific and technological endeavour, spanning the national science and research priorities."

Raijin is used by researchers across 35 universities, five national science agencies, and three medical research institutes, as well as industry.

It was originally installed in 2012.

The NCI has made a series of upgrades to the supercomputer's infrastructure to keep the ageing system performing over the past two years.

What's in MYEFO for tech?

It will replace the many paper-based systems used by current and former senators, members and their staff for expense management, which have been described as “absolutely antiquated” by Prime Minister Malcolm Turnbull.

The overhaul will also see the end of the Department of Parliamentary Services’ existing HR system and the current COMCAR automated management system.

Finance has already begun looking for a commercial off-the-shelf platform.

The government will also fund a 24/7 cyber incident monitoring and response capability within the Australian Cyber Security Centre,.

The funding forms part of a $154.5 million package that will implement the recommendations of the 2017 independent intelligence review.

The capability is expected to manage public messaging and policy advice during “rapidly emerging cyber events”.

The Digital Transformation Agency will receive $8 million from next year to implement its secure cloud strategy, which will help agencies adopt cloud services.

The strategy, which has been completed and shown to the digital transformation committee of cabinet, will replace the federal 2014 “cloud first” mandate.