Newcrest puts digital back on Lihir mine roadmap 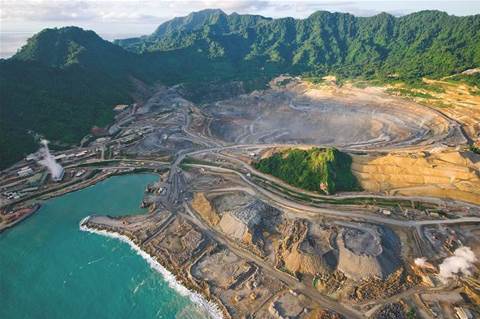 When Newcrest Mining outgrew the VSAT links used at its remote Lihir Island operations in PNG, it had to look outside of conventional means for better connectivity.

Connectivity at the site had been an issue for some time and had led to the under-utilisation of business critical applications such as safety and mining systems, SAP and Office 365, because there wasn’t enough bandwidth to support their use.

The lack of connectivity was also a drag on the company’s ability to bring future digital solutions to the site. Most had been put “on hold” until the connectivity issue could be addressed.

Lihir Island is extremely remote: around 200km from the nearest provincial capital Kavieng and 800km from the PNG capital Port Moresby.

It is Newcrest’s largest gold producing asset and therefore of significant strategic value to the company.

Newcrest had looked at replacing the VSAT links before with microwave or submarine fibre optic cable, but both had proven unviable due to the mine’s location.

However, regulatory restrictions in Papua New Guinea meant a direct relationship was not possible, so Wood worked to bring O3b and Telstra together to build a solution.

It was the first time the two telcos had partnered to deliver a single connectivity system.

Newcrest said the connectivity solution had proven itself “as a viable service to remote mine operations” and had brought “cost effective, high speed and low latency” communications to the site “that would traditionally be cost prohibitive".

“Subsequent to the implementation, industry peers have been interested in understanding the solution and benefits of the project,” it said.

The project brought a 600 percent increase in bandwidth and a 300 percent improvement in latency.

Another benefit was the improvement in internet access for Lihir residents and fly in fly out (FIFO) workers at the site.

Newcrest said better site connectivity was already having an impact, with an estimated - and conservative - 10 minutes per employee per day productivity gain. This alone would save the company millions of dollars a year.

The new links are also performing at levels above-expectations, based on early benchmarking studies.

This project has been named a finalist in the industrial category of the iTnews Benchmark Awards 2017/18. The full list of finalists can be found here.