Bitcoin will be crackable by quantum computers in a decade 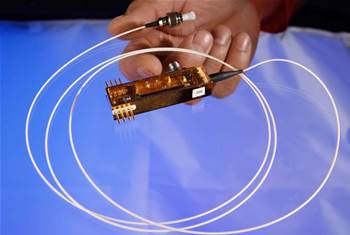 Quantum computers are still in their infancy, but are expected to develop rapidly and be able to break the cryptographic signatures used by virtual currency Bitcoin within a decade.

Fast quantum computers could lead to attackers stealing funds from digital currencies without being detected, the Quantum Resistant Coin (QRC) group of researchers from the University of Technology Sydney's Centre for Quantum Software and Information said.

Their paper Quantum Attacks on Bitcoin and how to protect against them [pdf] estimates that the elliptic curve cryptographic signatures used by Bitcoin are at risk of being broken as early as 2027 by a quantum computer.

These digital public key signatures are used in Bitcoin to prove ownership of units of the currency.

The cryptographic proofs-of-work used to verify transactions in Bitcoin's distributed ledger database, however, will be more resistant against faster quantum computers, the researchers said.

But the researchers said the crypto currency community should start preparing for attacks on their digital assets.

“Many existing Bitcoin accounts and all new transactions will be at risk within ten years, so we need to start thinking about solutions now,” Dr Tomamichel said.

The researchers suggested using proofs-of-work such as Momentum, Cuckoo Cycle and Equihash instead of Bitcoin's current HashCash algorithm to secure against attacks perpetrated through faster quantum computers.

Such proofs-of-work "cannot be accomplished significantly faster with a quantum computer than with a classical computer," the researchers said.