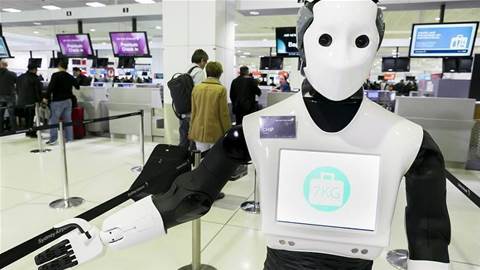 Helps with check-in and departure info in Sydney.

The Commonwealth Bank has loaned its humanoid robot ‘Chip’ to Air New Zealand for a five-day trial at Sydney Airport.

Air New Zealand said Chip would be deployed at check-in counters and departure gates, mostly to help travellers check they are in the right place for their flights.

CBA bought Chip last year as part of an investment around “social robotics” research. The robot is known as a Reem and is made by Spanish company Pal Robotics.

CBA said it hoped that by loaning the humanoid it would better understand how to interact with the robot meaningfully in “dynamic” environments; most of its testing to date has been in a lab.

"The airport is a busy and often overcrowded environment with signs, instructions and messages every which way you look,” Air New Zealand’s chief digital officer Avi Golan said in a video.

“Our customers can feel overwhelmed. The experiment is about bringing information to life, through innovative technologies”.

It appears the robot will be able to scan boarding passes if they were held up to its eyes, or to interact with customers through a screen embedded in its chest.

The robot will only be trialled until the end of this week.