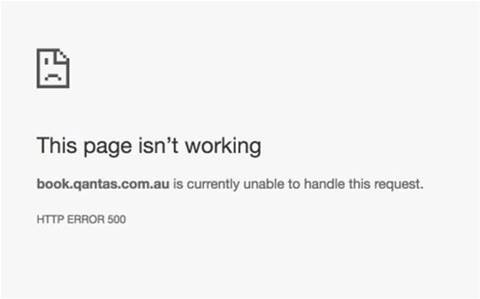 An outage to the Amadeus booking platform has downed services for customers globally, including Australian airline Qantas.

Qantas on Wednesday morning advised it was "experiencing issues" with the technology, which were preventing prospective flyers from being able to access its booking function.

It said the outage was affecting Amadeus customers globally, and attributed the issue to a hardware fault at the third-party IT provider.

Qantas said the issue was unrelated to the Petya/GoldenEye ransomware attack currently infecting organisations around the globe.

"We’re expecting improvements soon and will update once it's restored," the airline told customers on social media at around midday.

An Amadeus spokesperson told iTnews all affected services had been restored as of just after 1pm AEST. It reiterated that the issue was unrelated to the global ransomware campaign.

The spokesperson attributed the fault to a "network issue".

"Amadeus regrets any inconvenience caused to customers," the spokesperson said.

Amadeus' customer base spans travel agencies, airlines, hotels, railways, car rental companies, ferry operators and more across the globe. It has a presence in more than 190 markets