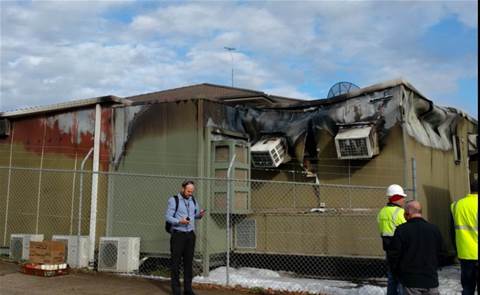 Orders in mobile exchanges on wheels.

Telstra has been hit by an exchange fire in Sydney’s north-west overnight that has caused “extensive damage” and impacted fixed and mobile services in the area.

The telco said that the site at Parklea had been declared safe following the fire and that it had technicians on-site to assess the damage and begin work on repairs.

In the interim, Telstra has said it will bring in two of its mobile exchange on wheels (MEOW) trailers in a bid to restore services while permanent repairs are made.

The MEOWs are expected to arrive onsite on Wednesday morning. The carrier has not yet said when services might be restored.

“Due to the extent of the damage we expect permanent restoration to take a number of days,” Telstra said.

The telco said the effects of the exchange fire were being felt in Parklea and the neighbouring suburb of Kellyville.

Twitter user Matthew Gaff posted several pictures of the aftermath of the fire, which showed damage to the outside of the exchange building.

A Telstra spokesperson was unable to confirm the cause of the fire.

It is the second exchange fire that Telstra has experienced this year, though this time it is having a much more localised impact.

Back in February, an exchange fire in Chatswood on Sydney’s lower north shore caused nationwide problems for both fixed-line and mobile customers.

In 2012, an exchange fire in Warrnambool in regional Victoria gutted part of the structure, cutting services and costing the economy in that region an estimated $408,000 a day.