Melbourne IT's DNS falls over in 'major outage' 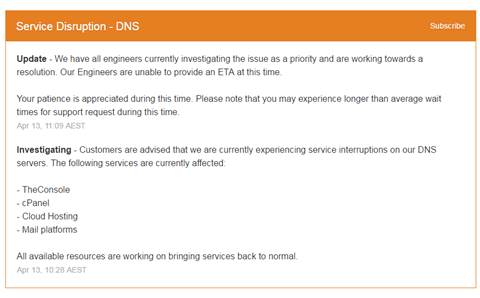 Australian domain name registrar Melbourne IT and its subsidiaries Netregistry and TPP Wholesale have blamed a distributed denail of service attack for an outage affecting DNS services that rendered customer sites inaccessible on Thursday morning.

At around 10:30am on Thursday Netregistry advised its customers that "service interruptions" on its DNS servers were affecting its cPanel, TheConsole, cloud hosting, and mail services. Melbourne IT and TPP Wholesale posted similar status updates.

Just over half an hour later Netregistry said all engineers had been directed to work on the problem "as a priority", but it was unable to provide an estimated time of service restoration.

"Your patience is appreciated during this time. Please note that you may experience longer than average wait times for support request during this time," Netregistry said.

It classified the issue as a "major" outage at the time.

The outage also took out Netregistry's own status page for a short period of time, as well as the netregistry.com.au, netregistry.net, and reseller tppwholesale.com.au websites.

Later on Thursday afternoon the company revealed a "large DDoS" attack on its DNS servers was behind the disruption.

"This impacted a large number of our customers," it said.

"This is now resolved and we are continuing to monitor the situation closely.

Netregistry was purchased by Melbourne IT in Febrary 2014 for $50.4 million.

The company claims to be the country's leading domain registrar with over 500,000 customers.