PwC Australia's move to 'cloud-only' IT 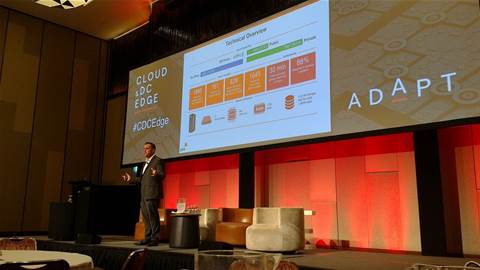 PwC Australia is two years into an IT transformation that has seen it shut its data centres and shift the workloads to run on either public or private cloud infrastructure.

The professional services firm moved 604 – or one-third – of its workloads into public cloud, which is “mostly Amazon and a couple of small [workloads] in Azure”, IT services director Matt Chamley told the recent Cloud & DC Edge 2017, which was co-organised by iTnews.

The remaining 1041 or two-thirds of PwC Australia’s workloads were shifted into a “private cloud construct” of Vblock 340 systems in Sydney and Melbourne that run in an active-active configuration, Virtustream software, “and other Dell-EMC technologies”. That environment is hosted and managed by Telstra.

“Two years ago we were 100 percent on-premises. There was no cloud. There wasn’t even a lot of SaaS in our organisation,” Chamley said.

“Now, we’re two years in and 100 percent of our workloads are spread across public and private cloud.

“We’ve hit some milestones but we’re starting to look at the next phases.”

The firm had some pressing needs to transform its IT infrastructure. Firstly, the real estate tenancies where its data centres were located were coming up for renewal. Instead of staying on, it decided to move.

“In addition, our hardware platforms were becoming end-of-life so we needed to do a hardware upgrade as well,” Chamley said.

But the prospect of transformation also promised the realisation of some key opportunities.

PwC – like others – has been watching the digital space closely and had its own strategy to “become a digital business”.

“That challenged us to think about how we could do things differently,” Chamley said.

“We needed to lift [IT] away from managing the infrastructure or the substrate that supports the business and guide the business to be a digital organisation.

“If we could commoditise the technology that we needed or services that we obtained, it would enable us to do that.”

The firm also saw an opportunity to upgrade its IT infrastructure to better support staff working at customer sites or wherever they happened to be.

“To do that, cloud was paramount,” Chamley said. “It’s less about where I host the data but how I get it out to the people that need it the most.”

One of the first steps of the transformation was to consolidate and decommission parts of the existing infrastructure.

“When we started the journey we had about 1885 servers,” Chamley said. “As part of the process and preparation we decommissioned a lot of servers.”

“PwC’s a network of 154 independent companies but there are some global platforms, so we thought why should we have a copy of what some of the other regions have? We worked globally to consolidate those into single platforms.”

The firm also looked to more conventional SaaS products to put some functions into the cloud. That included adopting Salesforce and Workday, and recently Google’s G Suite for workforce productivity.

Chamley said the firm managed to decommission 781 servers as part of this process. Workloads running on the remaining servers were then transitioned into the public or private cloud environments.

The number of servers has grown again back to 1645, though Chamley noted that the growth was “controllable” rather than being the result of server sprawl.

After two years of IT transformation, PwC’s environment is also close to 100 percent virtualised.

“When we started we were at 64 percent virtualisation,” Chamley said.

“We’re now at 99.1 percent virtualisation, and that grates me a little bit that we’re not at 100 percent. We’ve got a plan to virtualise [the remainder] over the next 12 months to get to 100 percent.”

“So we moved up the stack a little bit into PaaS but not too high,” Chamley said.

Through a self-provisioning portal, users are able to spin up a Windows or Linux virtual machine or hosted database. It now takes only 30 minutes to provision a new server, down from 2.5 days.

“That then enabled our development team to have some flexibility and speed and start to operate independently of infrastructure operations,” Chamley said.

The organisation is “ultimately trying to emulate a service provider model", Chamley said – enabling the firm’s seven lines of business to self-provision IT infrastructure, but also to seek help if they need it.

“The infrastructure team are moving away from heavy engineering and into the DevOps space. They help the application teams and work with the business, and occasionally drop into the lines of business to ensure new services evolve and current services are maintained,” he said.

“Generally if a line of business is developing a product, we can provide guidance and advice if they’ve got questions on system architecture.

“If it’s a product they’re taking to market or something a bit more complicated, we may embed a DevOps engineer or three into that product team for a period.”

In becoming an IT service provider to the business, PwC Australia has also adopted a chargeback model for services used by its seven lines of business.

Chargeback is commonly used in shared services where unit costs are calculated and passed on to the users of those services.

In setting up the chargeback model, Chamley’s team “gave financial advice back to the business about what their actual costs are for IT consumption, gave them a forecast of their usage and consumption rates, and a forecast of what they would be over the next 12 months".

“We defined the services that the business was consuming [in the service catalogue], then we looked at the fully loaded cost around each of those services and consumption patterns and went back to the business,” Chamley said.

Once everything was agreed, IT “transferred part” of its budget back to the lines of business.

“We give them an invoice every month and show them what they’re consuming, what the utilisation rate and cost is,” Chamley said.

“I think there’s sometimes a lack of understanding about the costs associated with IT and how it supports the business,” Chamley said.

“One of the important things to enable the business is to give them visibility of what they’re consuming.

“The upside of that visibility [is] very interesting questions about how [they] can get it cheaper. When IT used to run the show no one was ever interested in getting it cheaper, they just wanted it up.

“It changes the paradigm of the relationship with the business from an ‘order taker’ approach to a partnership approach.”

While the initial engagement might be a “product-based, transactional discussion”, PwC’s model meant IT was being brought into different types of discussions once a product had been set live.

“From an ongoing perspective if a line of business has a number of services they’re consuming, and they’re struggling to manage their budget because they want to invest in a new opportunity but they’ve got existing commitments on previous opportunities, they have the visibility to come and have an open discussion with us,” Chamley said.

“For example, they might be consuming x number of workloads at y percent utilisation, is there a way they can consolidate those because the utilisation seems quite low. They can start driving those discussions.”