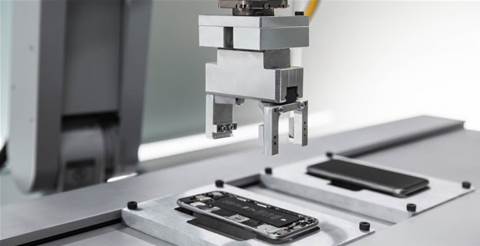 Operating in California and the Netherlands.

Apple's 'Liam' production robots are now in operation across California and the Netherlands, breaking down 1.2 million iPhone 6 devices annually.

At the time Apple said the robot had the ability to take apart one iPhone 6 every 11 seconds.

It has now revealed the Liam system is in operation in California and the Netherlands.

The tech giant said it had the potential to recover 190kg of aluminium, 80kg of copper, 0.13kg of gold, 0.70kg of silver, and 5.5kg of tin, among other components, by using Liam instead of the standard shredding approach for electronics.

"Many of these materials would not be recoverable at high quality using traditional recycling methods," Apple said in a report.

Apple has said it intends to modify and expand the system to handle different devices and recover more resources.