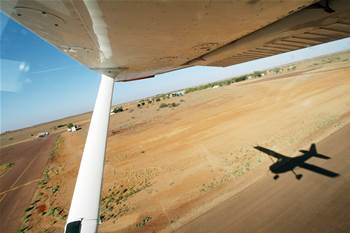 Outback town gets mobile reception for the first time.

All ten permanent residents of South Australia’s William Creek will get mobile coverage for the first time when Optus switches on its first base station subsidised under the federal government’s mobile blackspot program.

The outback town is famed for having one of the world’s most remote pubs and the only petrol station between mining centres Maree, Coober Pedy, and Oodnadatta.

It is surrounded by the world’s largest cattle station, Anna Creek, which spans some 24,000 square kilometres.

However, it is also frequented by a number of tourists passing through the village as they explore the famous Oodnadatta Track or stop over on their way to Lake Eyre, which is about 1000 km away.

Visitors - as long as they are Optus customers - will now enjoy 3G mobile reception in town rather than having to rely on one of William Creek’s solar powered pay phones.

Optus, which was conspicuously left out of the first $100 million round of the mobile blackspot subsidy program, has installed a satellite small cell in the centre of town, relying on both satellite connectivity and backhaul to deliver 3G mobile reception within a radius of three kilometres of the town.

The cell has been funded from $26.4 million the federal government handed Optus last year to build 114 new base stations in under-serviced areas across Australia. The Commonwealth grant tops up a $36.4 million investment from Optus, and another contribution from the South Australian government.

Currently in the evaluation stages of its third round, the mobile blackspot program has been funded to the tune of $220 million by the federal government.

Rounds one and two have already paid for 765 new base station builds, with the money distributed between Optus, Telstra, and Vodafone.

“Co-investment across sites in regional Australia allows us to expand our investment even further and reach areas that we otherwise may not have been able to,” Optus’ manager of mobile access planning Vin Mullins said.

“We thank all governments for investing in such a crucial program that helps to provide those living in remote and regional areas access to reliable mobile coverage.”

The South Australian state government hopes tourists will use their data coverage to broadcast holiday snaps on social media and promote the state’s outback regions to the world.