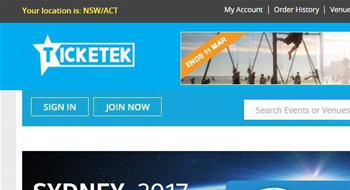 Every time you buy a concert ticket from Ticketek, the Australian ecommerce company collects as many as 500 data points on you.

It records and analyses everything from your buying power and entertainment preferences to psychological traits like your propensity to try new things.

Ticketek, which is the most visible arm of the TEG Group, has been capturing this data since 1997, putting together an unrivalled database of Australia’s cultural preferences and their changes over time.

More than 12 million customers - some 70 percent of all Australians over the age of 18 - are in the dataset, putting it on par with the kinds of customer information troves operated by the big banks, airlines or supermarkets.

The custodian of this mega data warehouse is TEG’s general manager of data analytics and insights, Andrew Reid, who is gearing up to present his thoughts at the CDO Summit in Sydney next week.

Reid calls his data behemoth “the entertainment genome” and compares it to Apple’s iTunes in terms of its sheer scale as a record of cultural consumption - albeit in a live rather than digital sense.

He says its insights are revealing and don’t always show patterns of consumption we might expect from certain segments of the community.

“When you think about hardcore sports fans you might assume that is their only interest,” he told iTnews.

“But when you drill down into the data you find that even people that are strong fans of a sporting code or a sporting event actually spend a high proportion of their discretionary income on arts and culture … the balance is quite profound”.

Through TEG Group’s analytics business, the company is commercialising these data-enabled insights to sell to third parties such as sporting administrators and concert promoters looking to personalise their approach to customers.

The dataset is hosted in AWS, manipulated using R and Python, and then displayed in Tableau.

But while TEG Analytics operations are already pretty sophisticated, Reid says he never stops striving to gain “a richer profile” of Australian show-goers.

At the moment TEG is on the prowl for businesses that are operating databases on a similar scale and with a similar level of hygiene and sophistication, that might be able to link up to add new dimensions to both companies’ knowledge of customer behaviour.

Reid wouldn’t name names, but said, for example, TEG could be looking for reciprocal partners in travel or finance.

And of course data will only be shared with customer consent - that all important check box at your concert ticket checkout.

Even within TEG’s internal data ops, however, the company is working to squeeze every last drop it can from its vast transactional database.

On top of tracking your favourite sporting teams, musical genres and the maximum distance you’re willing to travel to a gig - based on your home address - TEG Analytics is already generating returns by adding a layer of "psychographics" over the top of these consumption patterns.

“Psychographics points us to the psychology of why people are motivated to buy different products,” Reid explained.

The company is seeing a sales success rate 20 to 30 percent higher when it tailors its marketing to customers using these sophisticated psychological metrics.

“When you bring their mindset or their psychology into their spending behaviour, our ability to tailor a product has a much higher rate of success,” he said.

“Those psychological cues have a big impact in terms of modelling, marketing and obviously communications”.

The CDO Summit will be held on 15 March in Sydney.