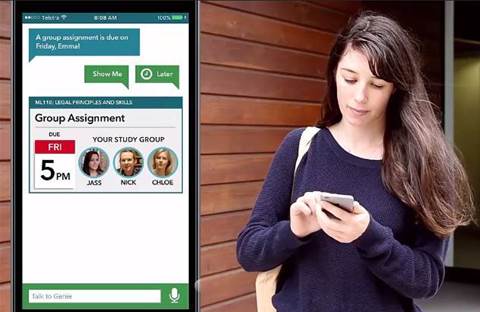 Platform will prompt you to study, and even organise meetings.

Students at Victoria's Deakin University will be able to access everything they need for campus life from an intelligent virtual assistant when the institution's 'Genie' smart agent launches at the end of the month.

Genie is a platform - presented through a mobile application - made up of chatbots, artificial intelligence, voice recognition, and a predictive analytics engine.

Deakin's chief digital officer William Confalonieri and team have been working on the technology for the last two years, and debuted a working prototype late last year.

The tool is intended to help students keep on track with everything they've got going on, keep them motivated through performance trackers, and help them get the most from learning materials and Deakin's support services.

Deakin has built the application internally, integrating the platform with a multitude of existing systems including its learning management platform, digital library, and IBM Watson-based support system, among many others.

It is a combination of vendor products, integrations, and internally built applications that have been bundled into one iOS and Android mobile app acting as a student’s personal assistant.

Confalonieri declined to comment on the underlying vendor technologies making up the platform given his plans to commercialise the service, but said Genie had been designed in a way that will allow the university to easily unplug from one technology and into another.

The artificial intelligence, predictive analytics, and voice recognition engines have all been sourced from the market, while Deakin built its own bot framework from scratch.

“Genie is a proactive agent. So if you have an exam in two days and you haven’t been reading the material, Genie is going to remind you that the exam is coming up and you haven’t touched your material,” Confalonieri said.

“Or if you have been studying in the same place for ten hours, it’s going to tell you that’s not good for your health, you should go walk for a bit.

“To know that, we to need to know that you haven’t been moving (location), that you haven’t been reading material (because the learning management system hasn’t been accessed) - we collect all that information in a predictive analytics engine that gathers huge volumes of data on all students and makes it into something that allows Genie to react.”

Deakin’s user experience experts spent many months talking to students about their expectations before the IT team even began having proper conversations about the technology that would underpin the platform, Confalonieri said.

“We needed to define a personality. It was important to determine the tone of voice - would it be pushy or passive? - as well as all these other parameters that needed to be properly defined to make sure Genie is developed in a consistent way,” he said.

“We didn’t want Genie to become more aggressive or something suddenly overnight just because a new developer has stepped in.”

The platform will go live in pilot mode before the end of the month for a portion of Deakin’s business and law faculty students. Confalonieri’s team will use the pilot to collect feedback and make any changes in time for Genie's anticipated full launch in August.

The app will only be available through Deakin’s internal app store for the pilot, and will launch on the iOS and Android app stores when it debuts to the full student base in August.

Despite not having even launched the product yet, Confalonieri is so confident in its future success that he has already begun the ground work to allow the platform to be commercialised.

Deakin is creating a start-up - owned by the university - that will exist to commercialise any innovations Deakin thinks will play well in the market.

Genie is first in line (once the platform is proven internally), with Confalonieri planning to offer a generic version of the smart agent that clients can customise to their liking.

He’s also planning on commercialising Deakin's Scout IoT location-based service, which taps into the internet of things set-up within the university campus to react to the user’s surroundings.

For privacy reasons students can choose to opt in to all or just some of Scout’s services, and have relevant information presentation to them based on their location. Confalonieri uses the example of food and drink offers when walking by the cafeteria.

Scout has been delivered as a prototype as part of small pilots, and Confalonieri expects the platform to go live for remaining student cohort at some point this year.

“We have been approached by many organisations locally and internationally, by peoople who want us to help them, work with them, or buy from us,” he said.

“So once we have Genie working for us in less than four weeks from now, we will be interested in commercial opportunities to provide Genie to other organisations. That’s another part of the plan."