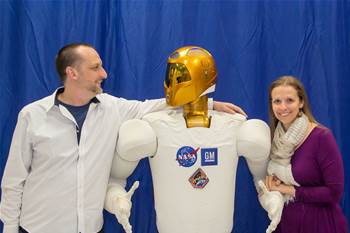 Up to 300 tasks could be performed by humanoid.

Woodside Energy will begin a 60-month trial of a NASA-built Robonaut that it hopes could be put to work on some 300 tasks across its operations.

The gas giant said it had secured the “anthropomorphic robot system” and would jointly explore with NASA “how the robotic technology could be used to improve safety, reliability and efficiency in the high-risk and remote environments where Woodside operates".

NASA describes Robonaut as “a dexterous humanoid robot” that has been conducting research into robotics technology aboard the International Space Station (ISS) since 2012.

Two NASA researchers will be seconded to work with Woodside on the project, which has been codenamed 'R2', according to The Australian Financial Review, which first reported the deal.

Woodside in a statement said the robot would interact with some of the “cognitive science technology” it is pioneering on its operations, though it did not specify exactly how the robot fit in.

However, it did say it had collected some 300 ideas “suggested by the company’s operators, engineers and maintenance workers” for tasks that the Robonaut might be suited to performing.

“The partnership fits well with our collaborative approach to innovation,” he said.

“We want the best thinkers from inside and outside our company to be working on solutions that unlock value in our operations.”

Woodside first unveiled its desire to harness a pool of innovative thinkers – both inside and outside the company – in early 2015 when it unveiled its Woodside innovation and technology hub (WITH) strategy.

WITH was refined and then largely rebranded as ‘FutureLab’ and has seen the company create partnerships with a number of universities and consultancies.

Woodside is also pouring resources into enabling data science across its operations, particularly through its investment in IBM’s Watson cognitive computing platform.

The company is presently piloting a sophisticated virtual avatar called Willow that uses natural language queries to poll its systems and data reserves for answers to questions that staff have.

It has also rapidly expanded the number of instances of Watson that it operates, with the last count revealing around a dozen.