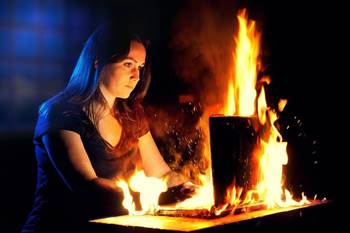 HP has expanded a recall for lithium-ion batteries in the company's laptops that pose fire and burn hazards, asking users to return some 101,000 units for exchange.

The company originally issued a recall for some 41,000 batteries in June 2016, but additional faulty batteries have since been discovered, the company said.

These can overheat and cause fires and burns to customers, according to HP.

HP said customers should cease to use the batteries immediately. The laptops can be still be used on mains power, with no battery installed.

Replacement batteries are provided for for free.

HP has released a Windows utility that lets customers check if their batteries are affected, and order replacement units. This can also be done manually, by entering notebook serial and battery bar code number on a web page.

Large recalls of overheating batteries by different PC manufacturers have been common occurrences over the past decade.

Sony recalled fire-prone batteries in 2006 and 2008, and Toshiba asked customers to return power packs for 54 models in February last year.

The United States Consumer Product Safety Commission (CPSC) accepted a US$405,000 settlement from HP in 2012 for overheating and burning batteries, a small number of which caused serious injuries to customers.

HP denied the CPSC's claims however, and the settlement - which was criticised for being small - was not an admission of guilt by the tech giant.