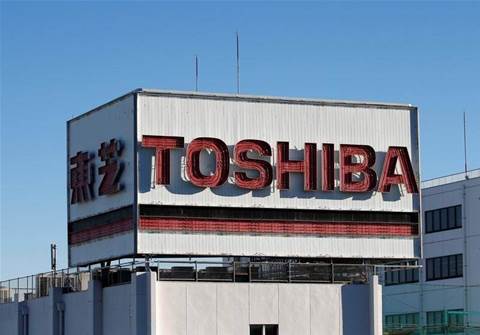 Toshiba's financial crisis has deepened amid reports it may unveil a bigger-than-expected US$6 billion (A$7.9 billion) writedown for its US nuclear business, sending its shares sliding 16 percent.

The reports cast doubt on whether steps by the scandal-hit conglomerate to bolster its finances - including the possible sale of a stake in its core chip business to business partner Western Digital - will be sufficient to address the shortfall.

Toshiba executives met with some of its main banks today to discuss possible support, sources with knowledge of the matter said. The 142-year old firm has also approached the government-backed Development Bank of Japan (DBJ) for help.

Battered by an accounting scandal in 2015, Toshiba was plunged back into crisis late last year after it emerged that it would have to write down cost overruns at projects handled by a US nuclear power plant construction firm which was recently acquired by its Westinghouse division.

Takeshi Kunibe, the president of Sumitomo Mitsui Banking, one of its main banks, said the lender would like to support Toshiba as much as possible.

"We would like to discuss courses of action after Toshiba comes up with specific figures and its plans," he said.

A DBJ spokesman said there had been no discussion about the amount or type of assistance Toshiba might require. Representatives for Mizuho Bank, another main lender, declined to comment.

Sources familiar with the matter had previously flagged the size of the expected charge at more than 500 billion yen (A$5.7 billion). Kyodo news agency and other domestic media said that estimates had now ballooned to 700 billion yen, in part due to unfavorable currency rates.

Toshiba declined to comment on its meetings with banks and said it had yet to determine the size of the writedown.

Separately, in an apparent sign of confidence in Toshiba, a government filing showed BlackRock now had a stake of 5 percent in the conglomerate, likely making the asset manager its top shareholder.

That represents an increase after its holding slipped from that level. Toshiba said last year it had been informed by BlackRock that it owned 5 percent as of March although Toshiba was not able to identify the holdings. The filings are only made when a stake reaches 5 percent. BlackRock was not immediately available for comment.

Put on the Tokyo bourse's watchlist after the accounting scandal, the laptops-to-nuclear conglomerate is not able to tap equity markets for funding.

It has said it is looking at splitting off its chips business - which accounts for the bulk of its operating profit - into a separate company.

It wants to sell a minority stake in the memory chip business and is considering potential buyers including Western Digital, a source familiar with the matter said this week.

Reports have put the size of that stake sale at around 20 percent. Toshiba's chips unit could be worth more than 1 trillion yen, industry sources have previously said.

Western Digital operates a Japanese NAND flash memory plant with Toshiba. It has declined to comment on the issue.

"The key thing to watch here is whether Toshiba's liabilities will exceed its assets. If that happens it will be difficult for some banks to step up with new financing," said Mana Nakazora, chief credit analyst at BNP Paribas.

Toshiba's shareholder equity, which represents its accumulated reserves, stood at 363.2 billion yen at the end of September, just 7.5 percent of total assets.

Nakazora said, however, she did not expect Toshiba to default on its debt as its main banks would stick by it, adding that some sort of package involving asset sales, financing and capital from the government would likely be arranged.

Shares in Toshiba slid as much as 26 percent today, but pared losses to finish 16 percent lower, giving it a market value of about US$9 billion.

National broadcaster NHK reported that Toshiba, which employs almost 190,000 people in businesses ranging from washing machines and elevators to sewerage plants and batteries, was looking to sell some units and other assets to raise 300 billion yen in cash.