How Harvey Norman jumped off its 'burning platform' 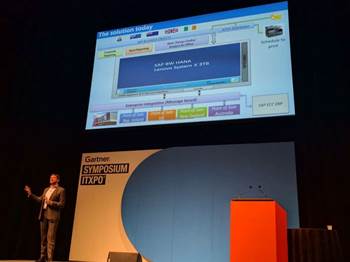 When Gordon Dingwall joined Harvey Norman in 2012, he was met with an “absolute nightmare": a network of 250 global stores each with an end-of-life server running their own reporting solution.

This legacy environment of blade servers running DB2 had sprouted up over 20 years of expansion and growth. Harvey Norman currently has 200 independent franchises and 50 owned stores.

“We had a burning platform,” the retailer's CIO told the Gartner Symposium this week.

“Which presented a bit of a challenge for us and my team: we had to decide whether to refresh and replace, or do something different.”

Each store’s reporting system contained data only from the individual store, and most of the information was 24 hours old. It made life difficult for franchises wanting up-to-date insight into their inventory position or supply chain.

Harvey Norman’s corporate reporting systems were similarly problematic: three separate systems had popped up across Australia (a homegrown Cognos platform), New Zealand, and Ireland (both internally built). And they only included inventory and sales data that again was 24 hours old.

“There were islands of data all over [the place], everywhere we had a store, with only snippets flowing back into head office,” Dingwall said.

“From a corporate reporting perspective it was also extremely hard to understand what was going on. [For example at weekends] there was a whole cottage industry of spreadsheets and phone calls needed in order for the CEO to find out how the business was doing.”

The data issues accounted for the highest volume of calls to Harvey Norman’s IT support office; it had as many as three support officers dedicated to dealing with the problem.

“This was the quickest business case we’ve ever put forward. We said ‘you have a burning platform and we need to do something’,” Dingwall said.

“‘Either we go to Lenovo and buy 250 new servers or we do something different. The business needs more data, in the one place, and faster’. That need was clearly there.”

Once the business case was approved, a working group was formed between IT and the business to nut out ambitions for the transformation. It came down to a desire for one trusted source of data, near real-time data (within 24 hours), more data sources, faster responses to data queries, self-serve query reporting and analytics, and a platform that was scalable.

The technology solution Harvey Norman ended up with was SAP BW on HANA, using Lenovo System X servers, Apos for its scheduling and distribution needs, and Ciber as its systems integration partner.

The decision to go with SAP was helped by Harvey Norman’s recent successful implementation of the vendor’s SCM product for supply chain management.

“It became very clear, very quickly that we needed that grunt, and we weren’t going to get it through traditional technology infrastructure,” Dingwall said.

His team started the transformation with a pilot of the new solution in five stores across Australia and New Zealand in January 2015.

The retailer then spent the seven months from July 2015 to February this year rolling it out to its entire store network, decommissioning all the legacy technology as it went.

It is nearing the end of the project's current phase: overhauling corporate reporting, which is due to complete in December.

“Thank god all the Saturday Excel spreadsheets and carrier pigeons are all gone,” Dingwall said.

But the overhaul hasn't been without its challenges.

First, there were the technical delivery conundrums: Dingwall and his team had to work out how to deal with an expected 1000+ users online concurrently trying to access data, and how to create and serve more than 20,000 reports overnight to stores by 8am each day.

The IT team initially sized up a 1TB SAP HANA box, which six months later it discovered was “woefully inadequate”.

“We realised we were starting to run out of memory and HANA was failing because it doesn’t perform well when you run higher levels of utilisation,” Dingwall said.

“Our way of getting out of that was we knew that because of the corporate reporting we were bringing on new users and data, so we'd already built an upgrade into the project, and we were already planning to do an upgrade anyway. So we basically just advanced that upgrade and moved that box to a 3TB box."

Then there was the headache of working out how to schedule 20,000 reports to different outputs - printer, network location, or email - without having to involve IT in the process.

“It actually was a bit of an oversight, we’d already started the project when we came across this,” Dingwall said.

“How do we manage 20,000 reports that everybody wants in different ways? We never had to deal with that before, [the stores] did it themselves with their own reporting tools.

"That was a huge issue because the toolsets we were looking at at that time didn’t have those capabilities.” It eventually addressed the problem through the Apos scheduling and distribution tool.

Dingwall similarly had trouble finding staff with the deep skills and experience to manage the HANA solution.

“That was quite problematic. Very, very quickly we were talking to engineers in Germany, China, the US, and had those people hooked into us while we were going through this," he said.

"We are now a lot more experienced and know how to make it run for our business. We’re in a good place now, but it was pretty painful.”

Franchisees are “now hungry for data and wants to get more information”, Dingwall said.

His team is looking at putting more data sources - like workforce data, traffic counting informaton, and advertising promotion data - into the platform, as well as making it available on mobile devices.