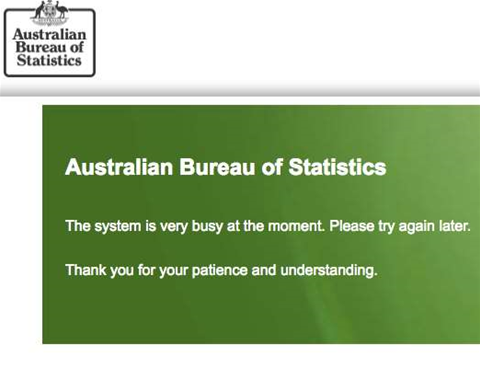 The Australian Bureau of Statistics has blamed an extensive outage of its census website on four denial-of-service attacks but insists data it collected so far is safe.

The website set up for collecting a snapshot of the nation's demographics was confirmed to be offline at 8.38pm last night. It was still down 12 hours later, with no advice on restoration.

"The 2016 online Census form was subject to four denial of service attacks of varying nature and severity," the ABS said in a statement.

"After the fourth attack, just after 7:30pm, the ABS took the precaution of closing down the system to ensure the integrity of the data.

"Steps have been taken during the night to remedy these issues, and we can reassure Australians that their data are secure at the ABS."

ABS' chief statistician David Kalisch told ABC News Radio that the Australian Signals Directorate had been called in to investigate, "but they did note that it was very difficult to source the attack."

Internet and social media forums were flooded last night with complaints about being unable to access the Census website and of troubles completing the form.

Testing by iTnews showed the two sites remained down in the morning, with only placeholders displaying on both. 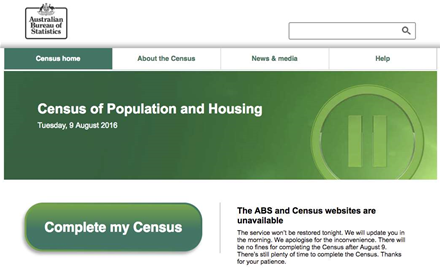 Census program manager Duncan Young told iTnews in July that ABS had overprovisioned capacity for the site, based on expected volumes of legitimate traffic.

Young said the site could handle traffic equivalent to more than a million households an hour. As the Census form would take less than half an hour to fill out, he did not expect there to be capacity issues.

There is no estimate for service restoration for the websites currently. They are hosted by IBM Australia, running the company's WebSphere application server.

Meanwhile, ABS said there will be no fines for completing the census after August 9, and insisted "there is still plenty of time" to complete it, until September 23 this year after the deadline was extended to lessen the load on the website.

The site crashes comes after ABS was already battling a privacy backlash against the collection and use of Australians' names and addresses in the current Census, to link that information with other government datasets.