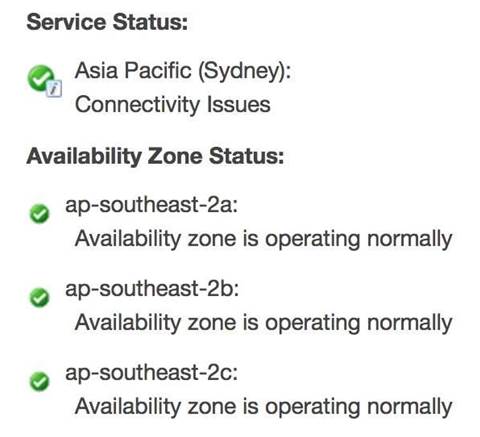 AWS first warned of the outage affecting Elastic Compute via its status page at 3:47pm, and an hour later confirmed the issue was related to a power problem. Sydney spent Sunday struggling through severe storms.

"We can confirm that instances have experienced a power event within a single availability zone in the AP-SOUTHEAST-2 region," it said.

"Error rates for the EC2 APIs have improved and launches of new EC2 instances are succeeding within the other availability zones in the region."

Power was restored to the affected facility around an hour and a half later and the company started working on restoring services.

AWS advised connectivity had been restored to the majority of Sydney region instances at around 9:30pm last night.

However it advised it was experiencing delays updating EC2 instance state data.

APIs were operating normally at the time but AWS spent the night recovering the remaining impacted instances.

"A couple of unexpected issues prevented our automated systems from recovering the remaining instances and volumes," AWS said.

"Most of these instances are hosted on hardware which was adversely affected by the loss of power.