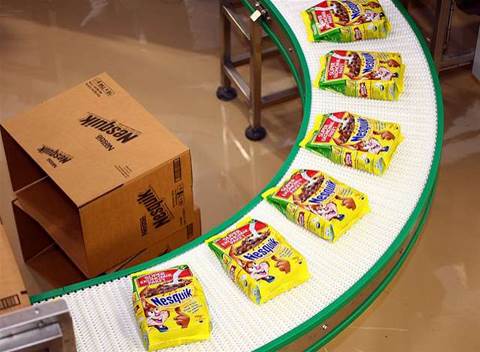 The company switched on the new core for what it calls Zone AOA – a sprawling business zone stretching Asia, Oceania and Africa - a month ago.

It followed Nestlé's successful pilot of the system – which SAP had previously referred to as a “lighthouse” project - in Malaysia/Singapore in April 2015.

Central to GLS is a desire to uplift the architecture and capabilities of the SAP system that was deployed under Nestlé’s GLOBE program in the early 2000s.

“Prior to 2000, pretty much every Nestlé country had their own IT systems, data structures, business processes and so on.”

But the idea to run a single system for the whole world hit an architectural snag – “there wasn’t a system big enough for us to put the SAP environment [on],” Stacey said.

“We had to create what we called a split architecture where we took the SAP database and split it across three machines, glued it back together again and made it work ‘seamlessly’.”

Despite the split architecture, Nestlé hit its standardisation and business process harmonisation goals with GLOBE.

It was only in the past two years – coinciding with the rise of digital and cloud - that it decided to uplift the ERP architecture underpinning its business, which now has about 335,000 staff worldwide.

“With changing consumer trends and technology changes we saw there was the opportunity to get rid of the split architecture,” Stacey said.

“We wanted a really high performing engine as the core of our digital strategy, and HANA seemed to be that.”

Nestlé has been toying with HANA for about four years but, according to a blog post, was convinced to convert that interest into a “large-scale program to reduce the complexity of GLOBE’s ERP architecture” more recently.

As with the GLOBE-era ERP, Nestlé’s size had been seen as a potential challenge in HANA’s early days, but Stacey said the company “took a bit of a gamble, a level of trust [with SAP], and we ultimately worked through the risk mitigation over a two-year period".

The result is a formal end to the split architecture model for ERP throughout Zone AOA, which covers 166 countries and 153 factories operating in 15 timezones.

The project involved both SAP and HP on the hardware side, and used SAP downtime minimisation services to reduce the business impact on the region during the transition.

“To take a whole zone down for more than 24 hours is an impossibility,” Stacey said.

“In particular, AOA stretches from Japan and New Zealand in the east all the way through to North Africa.

“There’s no weekend – there’s no obvious times to take the systems down because part of those countries operate 24x7.

“[SAP’s] near zero downtime technology was what we needed to be able to achieve this within a 24 hour time window.”

Nestlé is now working to bring the rest of its worldwide operations across onto a HANA core, with deployment scheduled to run throughout this year and into mid-2017.

It also plans to take advantage of future enhancements to S/4 HANA, particularly in the areas of cognitive computing and machine learning. SAP and IBM partnered only last month to bring cognitive capability to S/4.

Stacey also said Nestlé continued to take advantage of other SAP systems, including some of the newer cloud-based services it has acquired in recent years.

Nestlé has piloted Concur, a cloud-based travel and expense management service acquired by SAP in late 2014, in its Oceania region, which includes Australia and New Zealand.

“We really want to show we can have an ambitious rollout to do something like this in about 18 months across the group,” Stacey said.

However, in taking advantage of SAP’s burgeoning portfolio of cloud add-ons to the ERP core, Stacey urged SAP to focus more on technical and business integration of its acquisitions to smooth the adoption path for customers.

“I would also talk about business integration. At times it feels like we’re dealing with two companies or more with these acquisitions.

“We’d like to see that cleaned up and one SAP partnership we’re dealing with.”