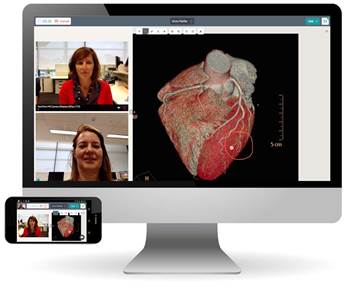 CSIRO’s Data61 has taken a major step toward commercialising its Coviu tele-health video platform, signing a memorandum of understanding with one of China’s leading health service importers.

The signing of the MoU with SunWo, which was attended by NSW Health Minister Jillian Skinner in China, would see SunWo license the video delivery platform and collaborate with Data61 to improve the digital availability of Australian health professionals in China.

Coviu’s project director Dr Silvia Pfeiffer said the agreement was the first major commercial deal Data61 had struck for the platform outside a handful of small Australian health practitioners who had licensed the platform following preliminary trials of the service.

Pfeiffer said that while China’s population was getting wealthier, it was also ageing, and the country’s health system was struggling to keep up with increases in chronic disease that require frequent but less treatment-intensive medical consultations.

Groups like SunWo aim to bridge the gap digitally by linking private patients in China to doctors in more modern economies including Germany, the US and, in due course, Australia.

“There’s a large need in the Chinese market for the knowledge that we have in developed countries that is just not present there, and they can’t build hospitals fast enough in the local market,” Pfeiffer said.

SunWo will also look to Coviu to help address a shortage of medical skills in the country by using the platform for training.

Prior to adopting Coviu, SunWo relied on Skype but found its audio and video was often of poor quality, unreliable and lacked certain features.

Coviu was developed on the open source WebRTC standard. That allowed Coviu to connect practitioners and patients natively through Firefox and Google Chrome web browsers rather than a dedicated application.

It also provides features like the ability to share medical documents and integrate translation services that Skype lacked.

“The native part is really important. They don’t need to install anything. They follow a link in the browser and they end up straight in a conversation,” Pfeiffer said.