CSIRO won't turn its back on old economy: Thodey 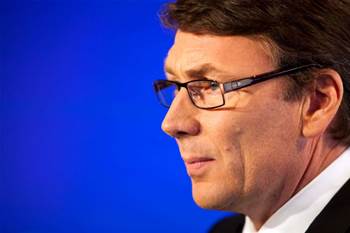 But a balancing act is required.

However, he conceded there would need to be a balancing act.

Thodey made the comments to iTnews after delivering a speech on innovation at the Knowledge Society’s Knowledge Nation summit in Sydney yesterday.

During his speech, Thodey expressed broad support for the government’s national innovation and science agenda (NISA), which is dominated by initiatives aimed at supporting tech entrepreneurs and an “ideas boom”.

Released late last year, the government said the policy applied to many areas of the economy including healthcare, education, agriculture, defence and transport.

However, tax breaks for start-ups account for the largest share of the NISA, and the document most frequently cites disruptive companies including Facebook, Uber, and Atlassian to make its case.

Thodey drew heavily on his digital credentials as a former chief executive of both Telstra and IBM Australia to encourage the federal government’s innovation agenda but spoke little of the CSIRO’s role in it.

When asked whether the CSIRO would need to shift its research priorities away from those industries, Thodey said they would continue to have the organisation’s support. However, he also flagged that the organisation needed to “adapt” and find a “balance”.

“We’ve got to adapt and move forward but there will be balancing. CSIRO works across 11 different areas. At any one time you’ve got balancing between the fundamental research and maybe applied research, so every area group is slightly different but I don’t see wholesale change,” Thodey said.

The executive did, however, concede that the CSIRO had not done enough to promote innovation it had already yielded from its current research efforts.

Freelancer.com’s Barrie joined Thodey to discuss skills at the event but delivered an address with a vastly different tone.

While Thodey suggested the government extend its policy to improve digital literacy across the workforce rather than focusing on STEM in schools, Barrie argued that it was nearly impossible for Australia to retain digital talent due to social policies.

Barrie laid blame for Australia’s skills shortage in Sydney directly at the feet of the NSW government.

He accused the Baird government of using lockout laws to drive consumers into casinos to extract gambling tax revenue. The knock-on effect, he said, was to drive talent out of the country.

He said the Baird government had a policy of “banning anything remotely resembling fun in the city”.

“It’s a bit hard to build a technology district when every second 20 year-old wants to leave because you’ve turned it into a bumpkin country town,” Barrie said.