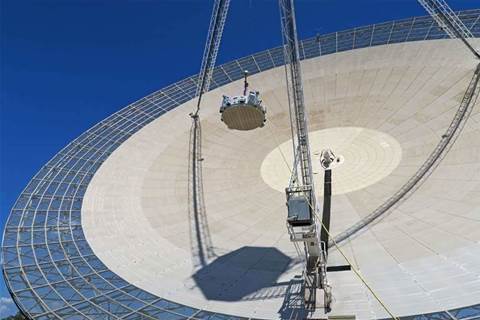 Researchers at the renowned Max Planck Institute of Radioastronomy (MPIfR) near the German capital of Bonn have opted to implement receiver technology developed by Australia's peak science and research organisation.

Known as phased array feeds (PAF), the CSIRO experimental radio receiver technology will give the astronomers a wider field of view of the sky.

The German scientists are currently installing the PAF by the Effelsberg radio dish near Bonn, which at 100 metres in diameter is the largest in Europe and the second biggest in the world.

Operating in the 1150 to 1800 MHz frequency range, PAF will be used to look for fast radio bursts (FRBs), a recently discovered cosmological phenomenon that is currently subject to intense research.

MPIfR director Michael Kramer believes the PAF will greatly increase the chances of catching FRBs when they occur.

As Effelsberg is situated in a densely populated area subject to radio noise, the PAF - which has been tested at the Parkes 64-metre radioastronomy telescope in central New South Wales for the past eight months - will need to be recalibrated for the new environment.

ASKAP uses 188 individual receivers to gather signals from 36 antennae, providing as many simultaneous beams in order to give a 30-degree view of the sky.

According to CSIRO astronomy research director Tasso Tzioumis, the PAF is unique to the Australian organisation.

The deal with MPIfR is part of a 20-year long collaboration effort with CSIRO.