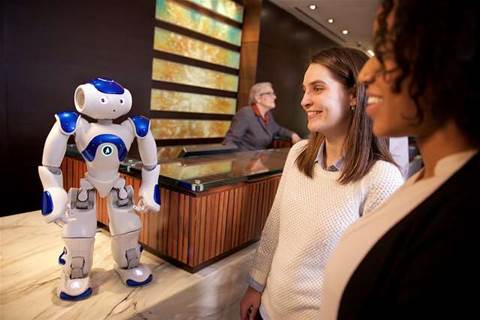 A hotel in the United States Hilton chain has become the latest to sign up for IBM's Watson cognitive computing tool, implementing the technology as a pilot with a robot concierge.

At the Hilton McLean in Virgina, Connie the robot - an off-the-shelf Nao machine made by Aldebaran Robotics - uses Watson to respond to basic questions guests might ask about services, local attractions and general travel information.

It marks the first time IBM has applied its Watson technology to a robot in the hospitality market.

Connie - named after Hilton founder Conrad Hilton - is stationed near reception at the hotel. The robot uses a combination of Watson application programming interfaces such as speech to text, natural language classifer and dialogue, to greet guests and to answer spoken questions.

The project was delivered in conjunction with WayBlazer, a cognitive travel recommendation engine that is built on the Watson platform as well as proprietary cognitive computing technology.

The WayBlazer platform responds to triggers from hotel searches by travellers to personalise the results, allowing Connie to suggest attractions outside the hotel as well as respond to queries about the facility.

"This project with Hilton and WayBlazer represents an important shift in human-machine interaction, enabled by the embodiment of Watson's cognitive computing," Rob High, chief technology officer of IBM's Watson group, said in a statement.

"Watson helps Connie understand and respond naturally to the needs and interests of Hilton's guests – which is an experience that's particularly powerful in a hospitality setting, where it can lead to deeper guest engagement."