Defence given $17 billion to improve IT 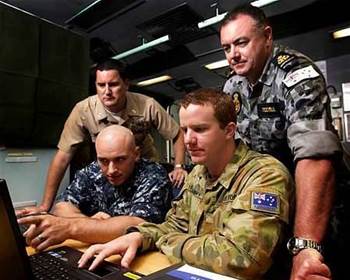 The federal government has committed to spending over $17 billion to improve the Defence department's technological capabilities in a massive program of works funded through its 2016 white paper.

The government has pledged to increase Defence spending by $29.9 billion over the next ten years to $195 million, or two percent of Australia's GDP.

A significant portion of that funding will go to strengthening Defence's cyber, systems, IT workforce, networks, and IT security capabilities as well as to investing in next-generation technologies.

The investment program covers three broad areas of work spanning the next ten years, and is intended to bring together the keys areas that need investment in order to sustain Australia's defence capabilities.

Around nine percent of the total $195 billion will be invested into Australia's intelligence, surveillance, electronic warfare, reconnaissance and space and cyber capabilities [pdf].

Fixing the IT environment

The Department of Defence currently supports more than 100,000 workstations across the globe, alongside 800 networks, more than 200 processing locations, and in excess of 3000 applications.

This environment needs to be "streamlined substantially to more manageable levels", the white paper states, echoing the findings of the Defence first principles review, which ordered the department to undergo a wide-ranging overhaul of its IT environment.

To remediate the "underinvestment" in Defence's IT shop over the last decade - which the white paper said had been compounded by the department's struggle to create a "coherent enterprise-level strategy" for its complex IT environment - the government has pledged around $5 billion over the next ten years.

It listed key initiatives designed to stabilise Defence's systems, like its end-user computing overhaul, the replacement of its terrestrial communications networks, and its data centre replacement program.

Up to $500 million will be spent on the next-generation desktop initiative, more than $3 billion has been allocated to the terrestrial communications overhaul, and up to $300 million will go to the data centre program, with up to $1 billion also for storage.

More than $2 billion will go towards creating a consolidated ERP system, with the department currently in the early stages of market sounding.

As much as $750 million has been allocated to the creation of a single information environment, while up to $500 million will go towards improving information management.

Up to $300 million will go towards improving Defence's enterprise-wide service oriented architecture, and an end user interface project - to run from 2012 to 2026 - has been funded up to $200 million.

"One of the highest priorities in the development of the investment program has been to address the systemic underinvestment in ICT that has led to serious degradation across the network," the government said in the white paper.

"Key areas of the network need urgent remediation, in particular to address the shortcomings of outdated and in some cases obsolete systems that inhibit the conduct of day-to-day business within Defence, with overseas allies and partners, and with industry and the community more broadly.

"While the process of remediation has commenced, the injection of substantial additional funding through the integrated investment program is designed to consolidate early gains."

The department will work with the government's Digital Transformation Office to ensure it is using best practice methods to shore up its digital base, according to the white paper.

The government has pledged up to $400 million to be spent in the years to 2025 to improve Defence's cyber security posture.

Australia's cyber capabilities will be developed "as a priority" to deter and defend against the growing threat of attack, the white paper states.

'This threat represents a real and present risk to our national security and economic prosperity."

The money will go towards protecting static information and networks as well as operational and tactical data, including deployed networks and systems.

But the government warned that delivering on this initiative could be be hindered by an inability to recruit adequately skilled workers, noting such skills are currently in short supply across the country.

The department estimates improving its overall intelligence, surveillance, reconnaissance, electronic warfare, space and cyber capabilities would require a total of 1700 extra ADF and public service positions to be filled over the next decade. It says this will be achieved recruitment and reshuffling the existing workforce.

The government will provide around $730 million over the next decade to support science and technology innovations for Defence, starting from July 1.

Around $640 million will establish a "Defence Innovation Hub" that will undertake "collaborative innovation activities" from initial concept to prototyping and full implementation. The hub will commence initial operations in the second half of the year.

A "Defence Innovation Portal" will also be created to act as the primary conduit between the wider local defence community and the department. It will allow SMEs to present their ideas to Defence through business.gov.au.