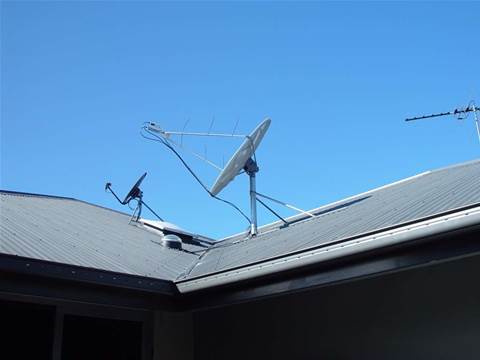 The network builder has previously signalled its intention to introduce a fair-use policy when its long-term satellites enter operation mid next year.

As first revealed by NBN watcher Ken Tsang, NBN is planning to implement limits that mean LTSS users would be able to download no more than 150GB each month [pdf].

The 150GB tier would be the highest of three tiers. The two lower tiers come in at 75GB and 100GB.

NBN also plans to restrict customer data usage during peak periods, providing them either 15GB, 20GB or 25GB of download for the period, dependent on tier. Quotas would similarly apply for uploads.

Customers who exceed the data cap will face having their speeds shaped down to as little as 256kbps for download and upload.

In late September NBN revealed it would start using network monitoring tools to stop individuals sucking up high amounts of bandwidth on the LTSS.

NBN's over-capacity interim satellite service was plagued with complaints of speeds at almost unusable levels after it reached its capacity of 48,000 users in December 2013.

NBN earlier this year ordered all satellite RSPs to enforce a 50GB four-week usage threshold for the customers causing the congestion. So-called leechers made up less than five percent of overall users, it said at the time.

The first of two long-term satellites launched earlier this month from French Guiana, and will go live to users next April.