Review: First Look: MSI Wind, a mini-laptop with a screen that doesn't suck 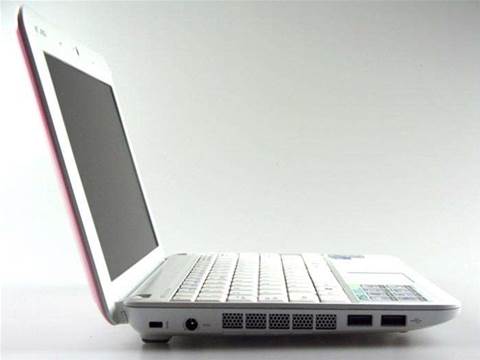 Our pics and first impressions of the hotly anticipated ultra-cheapie, and yes, it's better than the Eee in several ways.

Asus broke apart the laptop mold with the original Eee 701, and made a good thing even better with the Eee 900 and 901, but others have been watching and learning.

The result is the MSI Wind - a mini laptop for the train, park, bus, or plane, thaty takes the best bits of the Eee, and improves on them.

The good news is laptop makers like MSI are fixing two of our biggest pet peeves with mini notebooks - the crappy screens and keyboards. The MSI Wind has a 10in screen in beautiful matte finish, unlike the gloss which plagues larger machines.


The keyboard is also a joy to use (as is the keyboard on the Acer Aspire One) - which is impressive considering we're talking about a 26cm wide laptop.

We've been road testing the Wind, and our first impressions are that it's going to give the Eee a run for its money. At $699 it's also reasonably priced, though certainly not the cheapest option.

Price
At $699 the Wind matches the Acer Aspire One Windows XP model, though it's undercut by the Acer Aspire Linux machine $599 - plus Acer has a cashback offer). The Eee 901 is also slightly cheaper at $649. At the other end is the HP Mini-Note, a class act with wide screen and loads of storage, but starts at $899.

Performance
We'll have more data once we've done a full benchtest, but for now we can report the Wind is responsive, though there is a slight lag on opening applications. Bootup time was 36 seconds, verse 29 seconds for the XP Eee PC 900. Our test unit came with 1GB of memory, compared with the 1.5GB available for the Acer Aspire One XP model. The ability to add an extra 1GB would be handy, though for now we're not calling it a huge problem.


Storage
$699 gets you 80GB of hard drive storage, which is good, though you get up to 120GB with the Aspire One, and 180GB with the HP Mini-Note. There doesn't seem to be a flash option for the Wind, which is one of the few options we would have liked to have seen. This is where the Eee 901 maintains its edge, with up to 16GB.

Keyboard
RSI *should* be a thing of the past. We had no problems typing on the Wind. Hopefully ASUS is taking notice.


Screen
A 10-in screen is definitely the way to go if you're after a portable for the bus or train. We had hesitations, thinking it might be too bulky, but the extra few inches wasn't any more awkward, and Web browsing was much easier. Kudos to MSI for not choosing gloss. We’ve only played with the Aspire One briefly, but our initial impressions are that MSI has the upper hand here.

CPU
In our road test the 1.6GHz obviously had the goods to cope with XP (not difficult). The real test will be what effect it has on battery life. We're also yet to play with the Atom on a Vista machine, and while we know you'll cringe at the thought, we won't be surprised if it happens. All three Eee-class vendors (MSI, Asus, and Acer), are going with Atom, though HP is still using Via.

Battery
This is still the big Achilles heel of sub-$1,000 ultraportable, though the claims are getting impressive on paper, with Acer claiming 7 hours for the Aspire One. The good news is the Wind, like the Eee 901 and Aspire One (later this year), has a 6 cell battery option. Until we do a full battery benchtest, we'd recommend opting for the 6 cell, as all the battery times we’ve ever seen from this class of laptop so far have been woeful.

Weight
The Wind is 1Kg with a 3 cell battery, which puts it on par with the Aspire One and Eee 901 (which comes in at 1.Kg). Remember, this is less than the Apple Air, though it's still no patch on the Toshiba R500 (which also has a DVD drive).