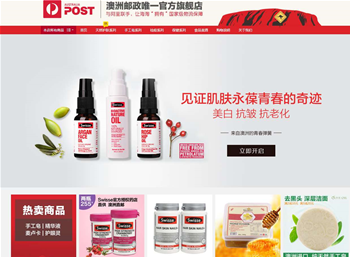 A proprietary market management platform developed by Australia Post to help local small-to-medium retailers sell into the Chinese market has attracted more than 30 customers to the government enterprise's books.

The organisation last year partnered with software development firm Market Engine to build out a platform that would enable it to act as the middleman between local sellers and Chinese marketplaces like Alibaba, which AusPost signed a partnership with last year.

The HTML5 platform - which integrates into Alibaba's Tmall business-to-consumer online store - was developed in six weeks, and the organisation has been testing it with clients over the past eight months.

Since its launch, more than 30 retailers including Swisse Vitamins, Olive Oil Skin Care Company, Cullen Wines, Jeans West and Bellamy's Organic have signed up to the online platform.

The strategy to expand into new areas of ecommerce was a key item contained in the organisation’s Building Future Ready strategy, which aims to diversify away from its loss-making letters business and into more profitable areas.

China has a population of around 1.3 billion, compared to Australia’s 24 million. Its ecommerce market is massive: China became the world’s largest online retail market in 2013 when sales reached $307 billion.

A recent Forrester report predicted online spending in the country would reach $1 trillion by 2019.

By establishing partnerships with the likes of Alibaba, Australia Post is hoping to open the door for local SMB ecommerce players to sell into China by taking care of the red tape for them.

The organisation has made a conscious decision not to offer the capability to larger players and is targeting mid-market players - at the level of The Iconic and Catch of the Day - who may lack the scale and firepower to expand on their own.

“Australia does around A$15 billion annually. [China] is a huge market.”

Sellers interested in gaining access to the lucrative Chinese market need to meet several requirements to be accepted onto the AusPost proprietary platform.

They must have a reputable Australian brand with business registration and a brand trademarked locally.

Sellers must have large supply of their particular product - over 500 stock keeping units (SKU) - available, preferably in the categories of baby, maternity, health supplements or non-perishable foods. Products must be made in Australia.

Once accepted, sellers input their item, sale price, amount of product available and photographs of the item into the Australia Post software.

Australia Post quality-checks the information and translates it into Chinese for Tmall. From there, AusPost takes over the rest of the process, thanks to partnerships with Tmall and China Post for warehousing and shipping.

AusPost and Tmall both take a cut of sales. There is no initial onboarding fee to join the platform.

“While the service is still in its infancy, we are continuing to engage closely with Australian businesses looking to grow their presence in new markets by testing how we work with them and the different platforms on offer,” a spokesperson said.

Australia Post is increasingly looking to technology to save it from a rapidly declining letters business.

Its China ecommerce service is just one in a line of growing digital solutions being offered by the organisation as it works to decrease reliance on legacy operations by reshaping its core services as online systems.

It has so far diversified into digital services such as the MyPost Digital Mailbox, MyPost Concession Account and identity and travel solutions.