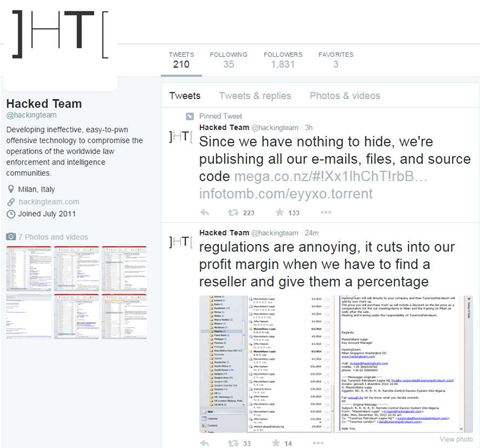 One of the world's most notorious providers of offensive information technology to governments has had its internal systems breached and customer documentation dumped on the open internet.

Hacking Team, founded in 2003 and based in Milan, Italy, provides surveillance software and intrusion tools to law enforcement agencies around the world.

On its website it boasts clients across the US, Europe and the Asia Pacific, assisted by more than 50 employees providing "all aspects" of offensive IT tools.

The company's primary surveillance tool - dubbed Da Vinci - earned it a spot on the Reporters Without Borders Enemies of the Internet list.

The company's Twitter account was today compromised, and around 400GB of internal emails, files and source code were leaked to the internet, and spread via social media.

The attackers also posted screenshots of the compromised data from the leaked file to Twitter, and defaced the company's logo and biography.

Earlier this afternoon - before his own Twitter account appeared to be hacked - Hacking Team engineer Christian Pozzi confirmed the breach and said the company was notifying affected customers and working with police.

According to the leaked data, Hacking Team counts customers from South Korea, Saudi Arabia, Lebanon, Egypt and Mongolia. The company has long maintained it does not sell to oppressive governments.

Australia is also listed as a customer of Hacking Team, according to the company's wiki.

A leaked client renewal list reveals the Australian Federal Police has made use of Hacking Team's technology in the past.

The AFP is however listed as "expired" in the client renewal list. The force has long been a suspected customer of Hacking Team competitor FinFisher, which produces a set of spyware and intrusion tools for law enforcement.

The leaked documents indicate Hacking Team account manager Daniel Maglietta and then-colleague Serge Woon - both who appear to be based in Singapore - travelled to Sydney city for two days on business in May last year. The reason for the trip is unclear.

The Attorney-General's Department, Defence and the AFP have been contacted for comment, as have Australia's state police forces. NSW Police was last year outed as a user of FinFisher.

The AFP declined to confirm or deny "what may or may not form part of its operational or technical methodologies".

NSW Police told iTnews it had not - either currently or historically - used Hacking Team's products, but did not comment further.

A WA Police spokesperson said while the agency doesn’t disclose the nature of all software or service providers it uses, there was no indication it had employed Hacking Team's software.

NT Police assistant commander Kris Evans told iTnews some areas of policing "due to their very nature are required to remain covert". He declined to comment on whether his force had used Hacking Team's software.

Queensland Police said it doesn't disclose details of its software and service providers "of this nature" due to security sensitivities.

Victoria Police said while it doesn't disclose the nature of all software or services it uses, there appeared to be no relationship between the force and Hacking Team.

A Defence spokesperson said no agency within the portfolio had used the company's spyware.

It is unclear who is behind the Hacking Team attack.