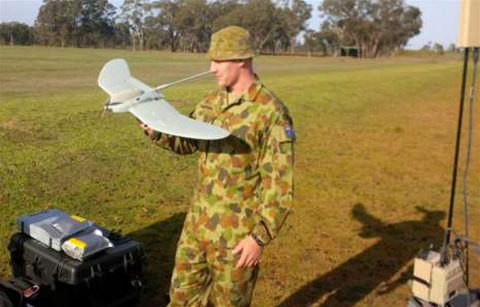 The Australian Army has expanded its use of drones by purchasing two new unmanned aerial systems to test out for surveillance and reconnaissance.

The Army has been using one large unmanned aerial system - the RQ-7 Shadow 200 - since 2011 within its Brisbane-based 20th surveillance and target aquisition regiment. The drone has flown more than 11,000 hours both domestically and in Afghanistan.

Last year, the Army held an 'innovation day' which showcased a number of modern technology capabilities to stakeholders within the organisation in an attempt to stay 'technically relevant' and promote a more 'agile approach' to such acquisitions.

The theme for the innovation day was surveillance and reconnaissance systems.

Following feedback from the event, the Army decided to expand its drone use by trialling two smaller drone systems - the Wasp AE and the PD-100 Black Hornet.

Xtek - the local supplier of the Wasp, which is built by AeroVironment - supplied around $7.7 million worth of the units, while Criterion Solutions provided the Black Hornet, which is manufactured by Prox Dynamics.

The Army plans to evaluate the potential of the systems next month as part of two exercises: Hamel and Talisman Sabre.

"The evaluation will focus on the employment considerations of the [drones] in contemporary land combat and surveillance units," a spokesperson said.

"It will review the enhanced capability the technology provides, as well as the systems, structures and processes required to realise the capabilities’ maximum potential."

Both systems are used for surveillance and reconnaissance and will help units to increase their awareness and protection, the spokesperson said.

"Traditionally, the Army would request the support of larger aerial surveillance systems, such as the Shadow; or, employ less technical methods of surveillance and reconnaissance to support battlefield awareness requirements.

"It also allows operators to remain at a safe distance from observed target areas, enhancing force protection in an increasingly lethal battle space."