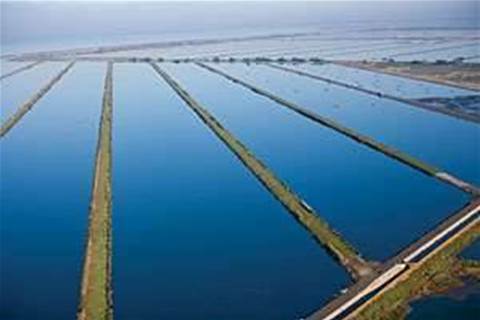 Saving workers from slips and falls in sludge.

Melbourne Water is hoping to fly more drones around its sewage infrastructure to measure gas concentrations, take sludge samples and monitor the dynamic stresses on plastic covers over the lagoons at its Western Treatment Plant.

The Victorian government-owned water authority has already conducted two trials of civil infrastructure inspections using unmanned aerial vehicles (UAVs) and is hoping to set up a supplier panel of companies it can contract in for various drone missions.

"To inform that process I'm actually finishing off a paper now thats trying to quantify how much of that need we actually have so we can go out to the market and say we have a certain amount of business [to offer]," Melbourne Water's technology improvement specialist Frank Courtney told the recent Connect 2015 conference.

"From a safety perspective this is effectively a vertical asset," Courtney said. A usual inspection requires two people to abseil down the face while attempting to locate "anomalies in the concrete structure" and write them down.

The utility brought in a UAV contractor who flew an Ascending Technologies Falcon 8 over the spillway for 20 minutes. Melbourne Water's asset managers had high-quality images downloaded from the flight within an hour.

"We took a process that would normally take five or six people over three days, and we took it down to two people in 20 minutes," Courtney said.

That success saw UAVs engaged in a second trial - a flyover of the Southern Carrier, a 4km long open channel that takes sewage from the Western Trunk Sewer to the Western Treatment Plant at Werribee.

Again, the UAVs were put to work taking high-quality photos and video, however the brief was slightly different.

"The asset manager who was after this particular inspection said, 'I've got a certain amount of money to spend each year. I want to know are there any hotspots along this length of carrier that I can target my spend'," Courtney said.

"He wasn't particularly interested in one little crack here or there, but if there was a hotspot of two or three or four issues in one area, that's where he was going to target his [maintenance] spend."

Courtney noted the Southern Carrier was an old but critical asset.

"We can't turn these things off if we have an issue," he said.

"Regular inspections are absolutely critical because we are very limited in how much or how many of our assets we can actually isolate."

The UAV contractors ran two passes of the carrier using different drones. The first pass, using a Microdrones md4-1000, pointed a camera "straight down" and took photos along the length of the channel. The 28-minute flight was performed autonomously, although engineers and the pilot maintained line of sight by following the UAV in vehicles.

A second flight followed using a Falcon 8, which captured high-definition video. "That gave us a really good picture of any lateral movement, any vertical movement and anomalies," Courtney said.

Melbourne Water is plotting further uses for UAVs and is particularly interested in how they can be utilised further in its sewage - wastewater - operations.

The utility is working with Draco Scientific and engineering consultancy Outerspace Design to create an "integrated methane and nitrous oxide sensor", which is intended as a future payload for a Microdrones UAV.

"Why we're interested in these two gases is really around how we manage concentrations of emissions from our treatment processes," Courtney said.

Melbourne Water is particularly keen to make sure it can capture - and keep - methane from sewage, which it harvests and uses to power a generator that converts it into electricity.

"It saves us an absolute fortune," Courtney said.

"We're very keen to use this sensor to fly through the [methane] to actually get definitive measurements. That data then supports process improvements so we can lower emissions and capture more and use it to generate more energy."

Sewage flows into plastic-covered lagoons that span multiple hectares. The covers prevent the methane from escaping and allow it to be captured for electricity generation purposes.

However, the covers have been known to tear on occasion. One did last Christmas. Courtney said inspecting the damage to the cover was the perfect job for a UAV.

However, he is hoping UAVs could also prevent such tears in the future.

"We're looking at doing some work with Monash University on this - a research project where we put strain gauges into the covers and then use UAV photogrammetry over the top to actually come up with a model to tell us the dynamic stresses within those covers," Courtney said.

"The covers themselves aren't necessarily terribly expensive assets but they're really labour-intensive to replace and install, and we'd like to extend their life as much as possible."

One other job it is hoped that UAVs could take over is keeping workers out of sludge pans - which is where the end-product of sewage treatment is stockpiled.

Sludge is often used for landscaping in major earthworks, but while it's in the stockpile, unlucky workers need to don boots and wade into it to collect samples that are used to determine the sludge's moisture content.

"It's unpleasant, but it's actually a significant issue for us in terms of slips, trips and falls," Courtney said. "We'd love to use a little core sampling device, fly out out over the pans and take samples with the UAV."