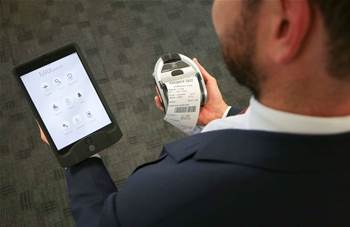 Budget airline Tigerair is equipping its check-in staff with iPads minis running an application that allows them to check in passengers, change seats and print boarding passes.

The mobility drive is an effort to cut down on queue waiting times at check-in, the airline said.

It similarly hopes getting staff out from behind the desk will improve the customer experience in the airport.

It plans to roll out further devices to Sydney and Brisbane in the coming weeks ahead of a full deployment to its all its airports.

Alongside check-in and seat changes, staff can use the app to upgrade a passenger's legroom or luggage allowance.

The case the iPad is housed in is fitted with a scanner as well as a credit card reader. Staff will carry a mini printer separately to issue the boarding passes.

The application interacts in real-time with the airline's internal systems to update boarding and numbers and baggage weight for a particular flight.

Tigerair said it plans to use the app in the future to rebook passengers affected by delayed flights.