Microsoft is continuing to extend its reach to other operating systems, with the release of a programming editor that runs on Linux distributions and Apple OS X as well as Windows.

Visual Studio Code is a free download, and currently only available in preview form. It is aimed at developers of web and cloud applications, being a lightweight editor rather than a full, integrated development environment.

According to Microsoft developer division head S Somasegar, Visual Studio Code builds on technology from the Omnisharp .NET tools and libraries project, and the TypeScript language for application-scale JavaScript. 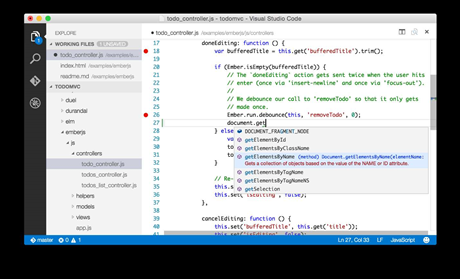 Syntax highlighting, bracket matching, auto indentation and customisable keyboard macros are some of the standard features of VS Code, along with integrated debugging support for Node.js. Other languages are to be added soon.

Visual Studio Code integrates directly with the Git open source code repository and 34 coding languages. Of these, Microsoft's C# and TypeScript are fully supported with features such as IntelliSense linting, outlines, and refactoring.

Visual Studio 2015 provides tools for cross-platform development on mobile operating systems such as Google Android and Apple iOS, along with Microsoft's Windows 10.

As part of Microsoft's push towards platforms other than Windows, the company also announced a preview of the .NET Core development framework, again for Linux and Apple OS X.