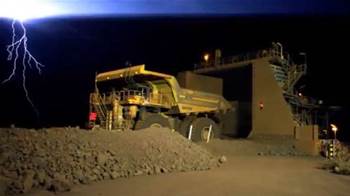 Rio Tinto wants the federal government to limit the amount of 1800MHz spectrum to be auctioned to mobile telcos, spectrum the miner relies on to deploy microwave backhaul to remote mine sites.

The mining giant today submitted its reponse [pdf] to the ACCC's request for advice on competition limits for regional spectrum licences.

It called on the Government to reconsider offering up all its regional 1800MHz to spectrum licenses.

Rio Tinto also called for a 'use or lose it' policy to ensure it was not locked out of future access to unused, remote portions of 1800MHz spectrum.

Rio Tinto has a number of apparatus licenses - essentially a leasing arrangement with ACMA for an approved purpose - for point to point links in the Pilbara region.

In its submission to the ACMA, it raised concerns that allocating the regional 1800MHz band entirely to spectrum licensing - long-term licences which offer a lot more freedom for use - would not be the best use of the resource.

"Rio Tinto would recommend that reallocating a lesser amount in the order of 2x40 MHz for spectrum licencing would allow enough room for apparatus licence use within the remaining 2x20 MHz channel space in the 1800 MHz band," it said.

"[The limits] would provide efficient and fair access for all the relevant industries including both the resource and telecommunications sectors."

It said spectrum licencing alone in regional areas would not support the flexibility required to allow efficient access to the spectrum by multiple parties in high take-up areas.

Simply opting for spectrum licencing would "create a situation where all available channels in the band have been allocated for a region but those channels remain unused in certain areas".

The miner said it had no interest in purchasing any of the 1800MHz under a spectrum license.

"Rio Tinto will only be interested in access to spectrum within relatively small geographic areas where apparatus licensing would be the most beneficial and efficient use of spectrum," it wrote.

The company also raised concerns that offering only spectrum licencing could result in spectrum being left unusued.

The ACCC should therefore take into account whether a current spectrum holder has unused spectrum across any frequency range when determining whether they can purchase new spectrum in the upcoming November auction, the miner said.

The miner recommended the competition watchdog implement a 'use it or lose it' approach.

"If a current spectrum holder has existing unused spectrum in any frequency range, then that should limit their ability to purchase further spectrum in the 1800MHz band," Rio Tinto said in its submission.

"No organisation should be able to block others from using the spectrum by purchasing spectrum and not using it, or offering it for re-sale to other potential users."

The call for public submissions by the ACCC was instigated by the Department of Communications earlier this month, ahead of the ACMA's auction for licences covering parts of the 1800MHz band in regional Australia this November.

The agency had directed the ACCC to advise on whether there should be any competition limits in the auction.

The spectrum release is highly sought-after by 4G mobile network operators - all three of Australia's mobile carriers have existing 4G deployments in the band.

At the time the ACCC said it expected the spectrum acquired in the upcoming auction would be mainly used for deploying LTE/4G technology for mobile broadband services, and also for smart networks such as automated transport and mining systems.