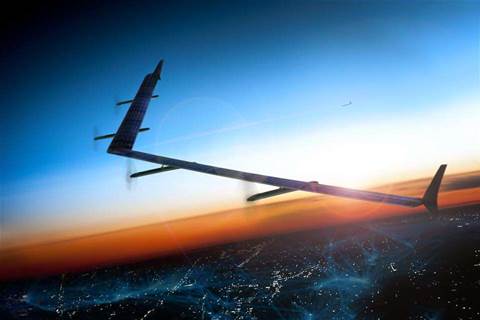 Facebook has outlined an ambitious plan to use solar-powered unmanned aircraft to provide internet access to people without connectivity.

First mooted a year ago, Facebook CEO Mark Zuckerberg today said the final design of the aircraft, code-named Aquila (eagle in Latin), will be able to fly for months on end, powered by solar panels on its wings. A prototype has already taken a test flight in Britain, he said.

Weighing less than a car, Aquila has a wingspan larger than a Boeing 737 commercial jet aircraft, Zuckerberg said, and cruises at altitudes of over 18,000 metres.

The aircraft will "beam internet access down to people from the sky" Zuckerberg said, using free-space optical communication technology that utilises infrared lasers.

"Aircraft like these will help connect the whole world because they can affordably serve the ten percent of the world's population that live in remote communities without existing internet infrastructure," Zuckerberg said.

The Aquila drone is part of Facebook's internet.org project, which aims to provide network connectivity to the world.

Facebook isn't alone in trying to deliver internet access via the skies. Google launched a fleet of balloons over New Zealand in 2013 as part of Project Loon, providing 3G-like network speeds.

It said late last year that improved Project Loon balloons would be launched over Queensland in conjunction with Telstra, using the telco's 2600Mhz spectrum to test connectivity.