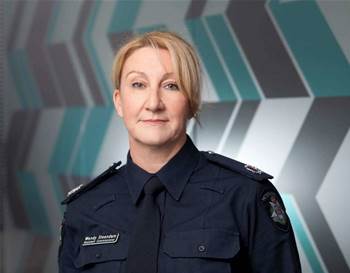 Does the force even need to replace LEAP?

It's not often that the back-office technology of a government agency makes its way into the public consciousness.

But such is the notoriety of Victoria Police IT, which has been marred by the sort of lightning-strikes-more-than-twice luck this past decade that would keep most CIOs up at night.

Following the tragic data-sharing lapse implicated in the death of Luke Batty, chief commissioner Ken Lay lamented that “we have still got a green-screen system in Victoria Police”.

“Ultimately we need a contemporary IT system and we haven’t got that at the moment,” he said at the time.

Lay, a vocal advocate for IT reform, formally left the force on 31 January. But his vision to turn its fate around will continue to be driven by Victoria Police CIO, assistant commissioner Wendy Steendam.

We first spoke to Steendam, a 30-year veteran of the force, over a year ago. She had just been appointed the force’s first CIO in a long while, and tasked with the seemingly insurmountable challenge of modernising an organisation that still hand-writes reports.

Now, a bit over 12 months later, Steendam says the past year was "challenging", but she's nonetheless been able to tick off some significant milestones.

For one thing, a number of officers in the family violence unit are now able to enter records of their daily activities directly into the Law Enforcement Assistance Program (LEAP) from their desktop computer.

It may not seem revolutionary, but previously, at the end of their shift, Victorian police officers would fax hardcopy documentation of their activities to the central bureau for entry into the core policing database.

The remainder of the 15,000-strong force will receive the same electronic capability soon, once all of the organisation’s change management boxes have been ticked.

Steendam also realises that the only way to eat an elephant of the size of the Victorian Police’s IT transformation is to start with the first bite.

This takes the form of the ‘sustain’ program, the first step in the organisation’s long-term Policing Information Process and Practice Reform (PIPP) journey, which will lay the technological foundations for modernisation.

This program, Steendam insists, is a hare’s race, not a rabbit’s.

“Whilst it might not be immediately visible to others, there is an enormous amount of work going on. It is essential work that will enable us to progress to our future state," she told iTnews.

Since September, the IT team has come about half the way though its refresh program. This includes replacing the agency’s ageing mainframe and updating all the hardware inside its data centre.

The project will no doubt be pushed along by the now-completed market refresh of Victoria Police’s major infrastructure outsourcing deal, which sees responsibility change hands from Fujitsu and to new managed services player Kinetic IT.

Steendam and her team are also working hard to transition the agency off Windows XP and onto Windows 7 by the middle of 2015, teamed with the replacement of all Victoria Police’s desktop PCs with new Acer machines.

“This is setting us up now to really focus on that transformational work and to focus on the vision that is articulated in the blue paper,” Steendam said.

The blue paper she refers to is the ten-year policing vision unveiled by Ken Lay in June 2014, which sets the tone for what comes after the sustain phase.

Mobility is the catch-cry of the policing manifesto.

“It is quite clear from that paper that we want to be a more modern policing organisation, and it is also very clear that in order to do that, technology has to be an enabler of information provision to members in the field,” Steendam said.

Lay’s wish-list foresees mobile devices in the kit of every frontline officer, part of an effort to boost the current average 54 percent of police time spent on the beat each day, to an aspirational 80 percent.

A number of Australian police forces have already made a concerted start on their own mobility programs, and are projecting huge jumps in police efficiency as a result.

Steendam insists she is not going to let legacy IT hold her back from keeping up with the pack. She denies that the age of LEAP - a survivor of more than 20 years - makes the prospect of rolling out mobile devices any more challenging.

“There has been a lot of work and investment done early on using an enterprise bus and some other infrastructure that actually allows us to work towards some of our mobility solutions quite - I wouldn’t say easily - but make this piece easier," she said.

“A device connection would not mean a direct interface with LEAP. There are other ways to get information into that system."

Before the Victorian election in November, the state Liberal party pledged $25 million to making this mobility vision a reality - only to be beaten by Daniel Andrews’ Labor party at the polls.

Without giving too much away, Steendam made it clear, however, that she did not see this as a set back.

“It would inappropriate to comment on any election commitments from the former government.

“But what I do know is that the new Labor government has made some commitments to having discussions with the chief commissioner about initiatives outlined in the blue paper, and they are on the record saying that mobility would make policing more efficient.”

What to do about LEAP?

Middleware, user interfaces and enterprise buses aside, LEAP continues to be the the most infamous aspect of Victoria’s technology base.

It has been the elephant in the room that no-one wants to tackle since work on a replacement was halted in 2011, deemed too expensive by the incoming Liberal government.

Surprisingly however, Steendam holds to her line that replacing the core crimes database might not be the right way forward for Victoria Police.

“We don’t want to be pre-emptive about whether LEAP needs to be replaced," she said.

“The work that we have done on infrastructure means that the system will be stable for many years, and whether that means LEAP has to be replaced or whether there is a different way in which to deal with that issue is something we are still looking at right now.

“It is really about developing a long-term, integrated and sustainable solution for investigations and intelligence management across the organisation. But what that actually looks like it something we are still working through as part of the transform project.”