Qld Police to get 5400 more iPads under re-elected LNP 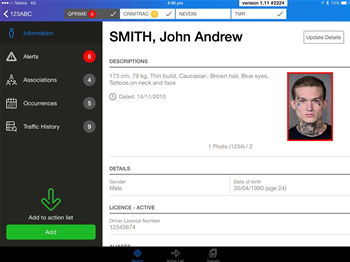 Queensland’s LNP government has promised to add 5400 extra devices to the state police's iPad fleet, a capability it expects will deliver efficiencies equivalent to 300 extra officers on the beat over four years.

Less than two weeks out from the state election, Premier Campbell Newman pledged to boost the number of iPads on the beat to 8250, making it the largest law enforcement device fleet in the country by a significant margin.

The number of iPads and other mobile devices handed out to Queensland cops has been steadily rising since QPS trialled its first 50 iPads in the middle of 2013.

The force had its funding boosted to expand the scheme to 1750 devices for the November G20 Summit, a number which then leapt to 2850 after local commands decided to pay for their own tablets out of internal budgets.

“Officers with real-time devices out on patrol can receive a call for assistance instantly and respond quicker, while they can also view and record CCTV footage live,"  Premier Newman said today.

"It means less time at the station and more time out on the beat, protecting Queenslanders and solving crimes."

The government has also pledged to better resource the force’s intelligence gathering capabilities in order to “tackle organised crime, to counter terrorism and respond during times of natural disaster”.

Science and tech research to get $90m

The LNP has also promised $90 million over three years for science and technology research if it is awarded a second term in government.

It hopes business and universities will match its pledge so as to increase the value of the fund to $180 million.

The ‘Research to Reality Fund’, unveiled by Queensland IT Minister Ian Walker yesterday, forms part of a plan to boost research capability and attract high-tech jobs to the state.

The funding will be targeted to industries pin-pointed as “pillars” of the state’s economy: agriculture, construction, tourism and resources.

A trial of drones used to identify and eliminate weeds and pests damaging Queensland crops was highlighted as an example of the kind of project the government is looking to support.

The grants program will be funded from the proceeds of loan repayments from the state’s universities, which have promised to bring forward the settlement of their debts.