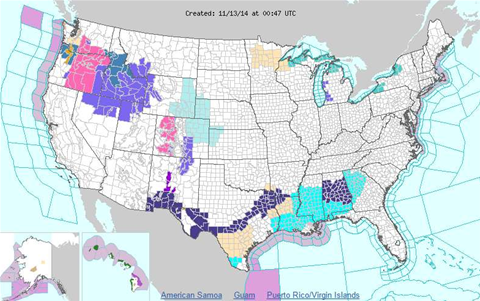 The US agency that operates the country's national weather service today revealed four of its websites were hacked in recent weeks, making it the latest US federal agency to fall victim to a cyber attack.

"In recent weeks, four NOAA websites were compromised by an internet-sourced attack," Scott Smullen, a spokesman for the National Oceanic and Atmospheric Administration, said today.

NOAA staff detected the attacks - which disrupted satellite feeds and downed websites in October - and responded immediately, performing maintenance on the sites, which were restored to full service, Smullen said.

He did not identify the websites that were compromised or elaborate on the attacks, but said they did not prevent the agency from delivering forecasts to the public.

The breach follows a string of attacks on government agencies including the White House, Office of Personnel Management and one of its main contractors, USIS, which performs background checks on US government employees.

Most recently, the US Postal Service said it had fallen victim to an intrusion that may have compromised the personal information of more than 800,000 employees, as well as data on customers who contacted its call centre during the first eight months of this year.

According to The Washington Post, Chinese hackers were behind the NOAA attack. The report said NOAA was forced to seal off data on disaster planning, aviation, shipping and scores of other uses.

Smullen would not comment on the source of the breach.

NOAA also experienced a data breach last month when an agency employee in Ohio was charged with stealing sensitive information from a federal database for the nation's dams and lying about the breach to federal agents.